This year is the 70th anniversary of my grandfather, Dwight D. Eisenhower, being inaugurated as President of the United States and, everywhere I look, I see how his legacy of leadership continues to impact our country and our world today.

On January 20, 1953, a crisp Tuesday morning in Washington, D.C., President Eisenhower was sworn in as our 34th President. When he stepped up to the podium to deliver his Inaugural Address, my grandfather did something no one expected. He asked his fellow Americans to bow their heads and then he led the nation in prayer. He prayed, “May cooperation be permitted and be the mutual aim of those who, under the concepts of our Constitution, hold to differing political faiths; so that all may work for the good of our beloved country and Thy glory. Amen.” To this day, my grandfather is the only president to have written and read his own Inaugural Prayer.

In his First Inaugural Address, my grandfather explained nine “fixed principles” that were meant to guide our leadership as a free nation. In summation, President Eisenhower said, “For this truth must be clear before us: whatever America hopes to bring to pass in the world must first come to pass in the heart of America.” He felt this so strongly that he reiterated these same words three years later when he began his run for a second term.

Ike lived by these words and worked hard to ensure that the morals, integrity, and values he wanted America to represent were reflected in his own life.

In honor of the 70th anniversary of President Eisenhower’s inauguration, I invite you to join me in making a special contribution to the Eisenhower Foundation’s Presidential Library Fund that will be matched, dollar-for-dollar, up to $50,000!

Thanks to an estate gift given through the Community Foundation of Dickinson County (Abilene, KS) and an anonymous Kansas donor, every gift received before March 31, 2023, will be matched. These funds will be put to immediate use to repair the beautiful fountain in front of the Place of Meditation, my grandparents’ final resting place, at the Eisenhower Presidential Library and Museum in Abilene, Kansas. My grandfather was deeply involved with designing the Place of Meditation and this fountain is original to his plan.

We have set an ambitious goal of restoring the fountain to working order by our annual D-Day Symphony at Sunset Commemoration Concert held the first Saturday in June. This event honors all veterans, both past and present. The Eisenhower Leadership Awards are presented to soldiers from the First Infantry Division at Ft. Riley, KS, and guests are invited to hear personal stories of World War II soldiers at the Thank a Veteran Reception. In order to meet this goal and ensure this year’s D-Day event is as special as possible, we need your help.

Can I count on you to make a gift in honor of the 70th anniversary of President Eisenhower’s inauguration?

Currently ranked 5th in the C-SPAN Presidential Historian Survey, Ike’s reputation and status continues to rise. And, because of people like you, my grandfather’s legacy of leadership is celebrated and shared. As the Eisenhower Foundation strives to impart Ike’s wisdom on today’s Americans, the truth remains that there is far more that needs to be done to secure the legacy of President Eisenhower and The Greatest Generation.

President, Dwight D. Eisenhower led our country to some of the most peaceful and prosperous times in history. As the United States transitioned from wartime to peacetime, President Eisenhower invested in our country’s infrastructure to meet the demands of an ever-growing economy. He enacted the National Interstate and Defense Highways Act, forever changing the country’s landscape and opening new frontiers for trade and business.

In response to the Soviet Union’s launch of the artificial satellite Sputnik I, President Eisenhower established NASA (National Aeronautics and Space Administration), fueling the “Space Race” and ultimately securing America’s place at the forefront of space exploration.

In a time when race relations were at a tipping point, President Eisenhower desegregated public schools by enforcing the historic Brown v. Board of Education decision. He also passed the Civil Rights Act of 1957, the first federal civil rights legislation passed by the United States Congress since the Reconstruction Era.

These are just a few of my grandfather’s presidential accomplishments. As one of our most loyal supporters, I hope you know the difference you make. Together, we are helping ensure the legacy of Dwight D. Eisenhower is passed down to future generations.

Will you make a gift to honor the 70th anniversary of my grandfather’s inauguration? Your gift will be matched, dollar-for-dollar, up to $50,000 and will restore the fountain at his Place of Meditation to its original grandeur.

The non-profit Eisenhower Foundation depends on the generosity of our friends, like you. No taxpayer money has been provided for this project so your gifts are more important than ever before.

Thank you for your continued support over the years. The Eisenhower Foundation and Eisenhower Presidential Library and Museum would not be where we are today without the support of donors across the world who “Like Ike.” 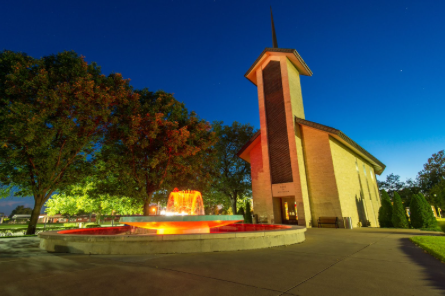 Funds raised will be put to immediate use to repair the beautiful fountain in front of the Place of Meditation, my grandparents’ final resting place, at the Eisenhower Presidential Library and Museum in Abilene, Kansas.