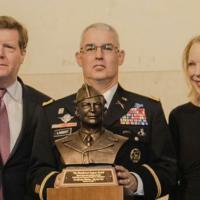 Based at nearby Fort Riley, Kansas, the 1st Infantry Division was the first to land on Omaha Beach on D-Day. “The Big Red One has been a true partner in honoring General Dwight D. Eisenhower and the troops he led, participating in countless programs and events at the Eisenhower Presidential Library,” shared Hagerty. “The 1st Infantry Division is always willing and happy to serve here at home — all the while, serving our country around the world and showing us the true meaning of ‘Duty First.’”

Eisenhower Foundation Executive Director Meredith Sleichter added, “Colonel Lambert represents not only the 1st Infantry Division, but the hundreds of thousands of veterans for whom General Eisenhower established this museum so we would never forget. We are so proud to be neighbors and partners in passing on the stories from the Eisenhower Era to future generations.”