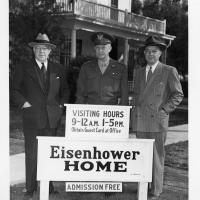 As World War II entered its final months, the concept of a memorial to honor Dwight D. Eisenhower, the Supreme Allied Commander of Europe, began to develop. Albert “Tad” Reid, a Concordia, Kansas, native who was a nationally known artist in New York City, traded letters and ideas with Charles Harger, editor of Ike’s hometown newspaper, the Abilene Reflector-Chronicle. In December 1944, Reid wrote Harger, “. . . several have approached me and said Abilene is the spot for a great memorial . . . the center of the country, Eisenhower’s home town, and better represents the boys of the entire nation than any other place . . .”   A small group, led by Ike’s hometown, worked diligently to lay the foundation to create an organization to spearhead this project.

As he embarked on a post-war victory tour in June of 1945, Ike often spoke of his midwestern roots. General Eisenhower remarked in his London Guildhall speech, "I come from the very heart of America.” On June 22, 1945, the victory tour brought Ike home to an enthusiastic crowd of several thousand cheering citizens along his parade route. In his Homecoming Speech, Ike said, “The proudest thing I can claim is that I am from Abilene.” Kansas’ favorite son had returned and
his words offered further encouragement to the effort to build a memorial in Ike’s home town. That day, the plan for a war memorial in Abilene, Kansas, to honor General Eisenhower and the American soldiers of World War II was approved by Ike, and the Eisenhower Foundation was established.

Over the next few years, fundraising for the planned museum stalled until then-Kansas Governor Ed Arn, Senator Harry Darby and Hallmark founder J.C. Hall combined efforts for a statewide campaign. General Eisenhower laid the cornerstone of the museum building on June 4, 1952, when he came home to Abilene to announce his presidential candidacy. He returned as President to open the Museum on November 11, 1954, the first official Veterans Day, which he had renamed from Armistice Day via Proclamation.

In 1954, President Eisenhower signed the Presidential Libraries Act and selected Abilene as the location for his library. The Foundation partnered with the State of Kansas to construct a building for this historic collection. Ike returned to Abilene to break ground on October 13, 1959, and chose May 1, 1962, for the formal dedication — the date of his mother Ida’s 100th birthday.

In 1966 the Place of Meditation was completed, a chapel which would become the final resting place of Dwight, his wife, Mamie, and their firstborn son, Doud Dwight "Icky". All buildings, including the home, were donated to the nation later that year and became part of the National Archives and Records Administration (NARA) which provides staffing, maintenance and security. Through your Friends memberships and generous donations, the Eisenhower Foundation continues to provide funding for exhibits, public programs, and IKEducation. Launched in 2013, IKEducation has taught more than 36,000 K-12 students and teachers about the Eisenhower era on-site, in classrooms and online. Your donations provide these field trips and programs to schools at no charge. And in 2019, your loyal support made possible the complete redesign of the museum exhibits.

For 75 years, the Eisenhower Foundation has been committed to ensuring the legacy of Dwight D. Eisenhower — a symbol of the heroes who won World War II — is remembered and honored for generations to come. Thank you for supporting our efforts to secure Ike’s legacy and honor the troops he led into battle. As we observe this historic anniversary and reflect on our rich history, we celebrate you, our steadfast supporters. It has been an honor to partner with you. We invite you to continue the journey with us as we look toward the next 75 years, so American citizens in the future can say with pride, "I Like Ike!"

(Take a virtual tour of the Boyhood Home by clicking here. To hear the tour, click on the gear in the upper right corner of the video to turn on the narration.)