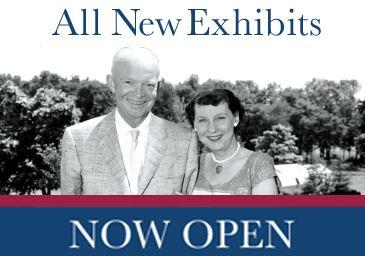 On July 29, the Eisenhower Presidential Museum opened to the public with all new exhibits after undergoing more than a year of renovation. Using newly digitized and never-before-seen footage from the National Archives and Records Administration, new mini-theaters offer visitors the opportunity to hear Ike’s words firsthand on a variety of events and issues from D-Day to world peace.

“Our team is excited to share this updated story with our visitors. We are thrilled to feature the holdings of the collection, not only here in Abilene, but also from the National Archives in Washington, DC. These resources allowed us to create a custom exhibit script using Ike and Mamie’s own words and really connect with the visitor on a personal level,” stated Dawn Hammatt, Director, Eisenhower Presidential Library and Museum.

The Museum renovation was the result of a successful five-year $12,250,000 capital campaign conducted by the Eisenhower Foundation. Donors from all 50 states contributed to this grassroots effort. Lead donors to the campaign included the Hall Family Foundation, the Dane G. Hansen Foundation, the William T. Kemper Foundation, and The Sunderland Foundation. For a complete list of campaign contributors, please visit the “Support” section of our website.

“We are truly grateful for your contributions. Dwight D. Eisenhower: A Legacy of Leadership was the largest fundraising campaign in the Eisenhower Foundation’s 74-year history, and the first comprehensive exhibit renovation in more than 45 years,” added Meredith Sleichter, Executive Director, Eisenhower Foundation. “Because of your financial support, we are now welcoming guests to a new, engaging experience at the Eisenhower Presidential Museum in Abilene, Kansas — Ike’s hometown.”

When speaking about his hometown in London, England, after World War II, Ike said, “I come from the very heart of America.” To echo this sentiment which Ike often shared with the world, the new Museum features entry and exit galleries that incorporate this quote in their titles. To borrow from President Nixon’s moving eulogy for General Eisenhower, “Perhaps no one sentence could better sum up what Dwight Eisenhower meant to a whole generation of Americans…And with his own great qualities of heart he personified the best in America.”

We are “IKE”cited to reintroduce this generation to the heart of Dwight D. Eisenhower and to host thousands of visitors to his hometown of Abilene, Kansas — “the very heart of America.”