"Unless each day can be looked back upon as one in which you have had some fun, some joy, some satisfaction -- that day is a loss."

Ike often felt discouragement and disappointment during his second term in the Oval Office. His family and friends and weekends at the Gettysburg farm sometimes seemed to be life’s only pleasures as he confronted one crisis after another. The promise of the peace and quiet of retirement he had been craving since 1945 kept him moving forward and provided an occasional bright spot when he needed it most.

At the Gettysburg farm, Ike could relax. He took much pleasure in overseeing the tending of the cattle and horses and supervising the work in the garden. Best of all, he worked on his “short game” and gave golf lessons to his grandchildren on his putting green in the backyard. Only a very few close friends received invitations to spend the weekend at Gettysburg. But when they did, Ike usually initiated a game of bridge. He was a “no nonsense” player with little toleration for a recreational effort or average-playing ability.

Meanwhile, Mamie worked on the final decorating touches to the home she had waited for so long. When foreign dignitaries were visiting Washington, D.C., Ike liked to take them to the farm for a tour that usually included the Pitzer Schoolhouse which John and Barbara bought in 1957 and converted into a home. A road was built between the farmhouse and the one-room schoolhouse.

During her husband’s second administration, Mamie Eisenhower continued to be an active first lady. She welcomed many women’s clubs, organizations, and special groups to the White House. Some she even sponsored. The American Heart Association, not surprisingly, was an organization to which she devoted her efforts and personal attention. As first lady, she reinstitute the White House Easter Egg Roll, which, she insisted, would be attended by children of all races. At a time when integration was a controversial and sensitive subject, she hosted a White House reception for the National Council of Negro Women and became an honorary member. Mamie once even offered a short campaign speech for a woman congressional candidate that she personally supported. 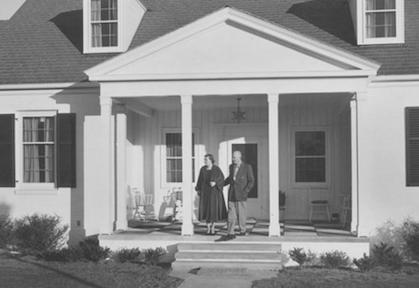 After her husband experienced a mild stroke in 1957, Mamie became even more protective of his health. She did her best to make sure that he did not overextend himself — not an easy thing to accomplish. It could not have pleased her to know that because Ike did not like all the restrictions that his doctor placed on him, he often ignored them.

Whenever he broke away from work for a trip to Newport, Rhode Island, or Augusta National Golf Club in Georgia, Mamie was relieved. (After his 1955 heart attack, Ike was cautioned to avoid high altitudes so the Eisenhower made Newport the summer White House instead of Denver.) Here, too, Ike played bridge with old friends like General Alfred Gruenther and members of “the gang,” men such as Bill Robinson, Clifford Roberts, and Pete Jones. When the Eisenhowers were at Augusta, they stayed at “Mamie’s cabin,” a three-story home that friends had built for them at a cost of $450,000.

By the autumn of 1958, Ike was desperately anticipating retirement. He would be 68 years old on October 14, 1958, and 70 years old when he left office, the oldest serving president up to that time. Ike was extremely tired and his health had suffered. And, although 1957 had been a very bad year for him, he declared 1958 “the worst” of his life.

By mid-1959, Ike was making plans for his retirement. As a former president, he would receive a $25,000-a-year pension plus a $50,000 yearly allowance to finance an office and staff. The Gettysburg farm was paid for, and the remainder of the money he had received for "Crusade in Europe" had been invested for him. It seemed that every publishing house in the country wanted to handle his White House memoirs. The Eisenhowers would be financially secure in their retirement. 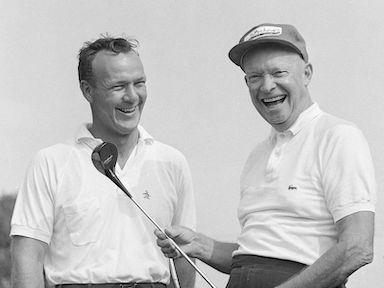 Ike and Mamie were also giving thought to where they would be buried one day. Among the sites they considered were Arlington National Cemetery, West Point, and Abilene. Ike favored his boyhood hometown, Abilene. Upon his mother’s death in 1946, the family home had been deeded to the Eisenhower Foundation, and the Eisenhower Museum, just five years old, was located nearby. His future presidential library would be built in the same general area.

From 1957 to 1959, John Eisenhower worked in the White House. In the beginning, he was on temporary duty working in the area of national security. As part of his job, he sat in on some high-level meetings. Next, he worked in the Pentagon in the Joint War Plans Branch. The younger Eisenhowers lived nearby in Alexandria, Virginia. The close proximity to Washington, D.C., made it convenient for the young family to attend an occasional White House function such as the state visit of Queen Elizabeth II and Prince Philip in 1957. 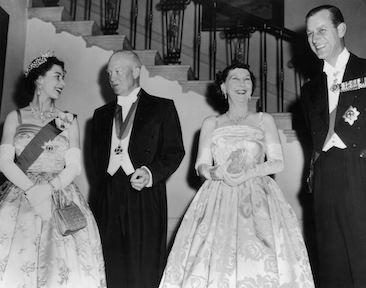 In the autumn of 1958, the White House Staff was reorganized, and John began a new duty — working in the White House. One of John’s responsibilities was to give his father daily intelligence briefings. Like anyone else, he had to schedule his time with the president. When John and Ike were alone, John called him "Dad," but when others were present, he addressed him as "the Boss" or "the President."

With only a year remaining in the Eisenhower presidency, John became a member of the advance team that traveled to set up the many details for upcoming presidential trips. Also, in the spring of 1960, John began his last major project — planning for his father’s post-presidential years at Gettysburg. On January 20, 1961, John retired from the Army, the same day his father retired from the presidency.

December 1960 was the last Eisenhower Christmas in the White House. Mamie decorated the White House as never before; she wanted it to be a Christmas that her family would remember forever. (Mamie’s mother had died just three months before, and this was Mamie’s first Christmas without Nana.) With their mother’s help, the grandchildren put on a Nativity play, wearing elaborate costumes made from the exotic fabrics Barbara had brought back from the Middle East. The grandchildren remember it as an “enchanted Christmas.” 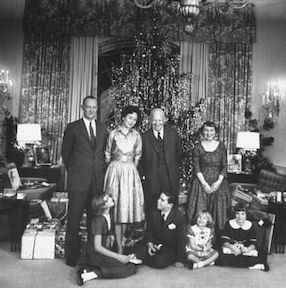 By early January 1961, Mamie had made sure that the Gettysburg household was set up, and the farm was ready and waiting for them. After nearly 45 years of moves that had taken them to nearly every region of the United States and to places around the globe, this move would finally take them to their first permanent home.

After the pomp and ceremony of the Kennedy Inauguration, the Eisenhowers drove home to Gettysburg. John was at the wheel. Along the way, groups of ordinary American citizens gathered, standing in the deep snow, to honor the former president and first lady with respectful applause. Arriving at Gettysburg, they were met with a “Welcome Home” rally in the town’s square. When their car finally pulled up to the gate of the farm, Ike hopped out to open it himself. Ike and Mamie were delighted to be home.