“. . . Just when this depression and this pessimism will cease no one can foretell . . . . But right now I am going to make one prediction. Things are not going to take an upturn until more power is centered in one man’s hands. Only in that way will confidence be inspired; will it be possible to do some of the obvious things for speeding recovery, and will we be freed from the pernicious influence of noisy and selfish minorities.”

Except for a pleasant, one-year interlude in France, the years from 1927 to 1935 were the “Washington Years” for Dwight D. Eisenhower. For the first time in his career, Ike was able to leave behind the increasingly distasteful extra duty as football coach. It was an extraordinarily busy period of his life that placed him on the inside track of the nation’s military and political establishment. Here he was to become well acquainted with the Washington social and political scene, observe the processes of government, and meet the great men of his day. Yet, by 1932, Ike yearned for duty with troops again; he would have to wait eight long years.

In January 1927, the Eisenhowers moved to Washington, D.C., General John J. “Black Jack” Pershing, upon the recommendation of Fox Conner, had chosen Ike to compile a guidebook for the American Battle Monuments Commission. The Commission had been created to establish cemeteries for American soldiers who had been buried in France during World War I and to erect monuments at major battle sites. American tourists soon would be visiting the sites of the war in France and guidebook would be needed.

In less than seven months time, Ike transformed enormous quantities of raw data into a very readable 282-page guidebook. General Pershing was very pleased with Ike’s work, and he wrote a lavish letter of commendation to the Chief of Infantry. Ike was so proud of the letter that he sent it home to his parents. He felt confident that he was on his way up the Army’s career ladder, and graduation from the Army War College was an essential next step.

Finished with the guidebook, Ike entered the Army War College in late summer, 1927. At 36 years of age, Ike was one of the youngest officers ever admitted to the War College. Unlike Command and General Staff School, the atmosphere at the War College was a relaxed and collegial respite to consider policy development at the highest levels of the Army.

After graduating first in his class at the War College, Ike was given a choice of assignments: a position on the General Staff in Washington or a chance to go to France to continue the work on the American Battle Monument Commission guidebook. Mamie made her preference clear — the Eisenhowers would be going to France.

Nearly every day, Ike traveled through the French countryside, driven by a French-speaking chauffeur. His mission was to view the historic sites of World War I firsthand. A favor pastime was to stop along the road, sharing food and conversation with French farmers and road workers. During his year in France, Ike absorbed a detailed knowledge of the French country side, of the road and railroad systems, and of the French people and their culture. All of this would prove invaluable to him later as Supreme Allied Commander in World War II.

Returning to the United States in September 1929, Ike would spend the next six years as a staff officer in the War Department. During the autumn of 1929, he finished his work for the American Battle Monuments Commission. It was here that Ike first met Colonel George C. Marshall, the man so respected by Fox Conner. It was a brief, but tantalizing, encounter.

In November of that year, Ike was assigned to the Office of the Assistant Secretary of War. He and Colonel Gilbert Wilkes were given an assignment to develop a plan that would effectively mobilize American industry in the event of another war. Through his work, Ike met prominent businessmen and industrialists that he would later call on during World War II. In April 1930, he and Wilkes traveled throughout California, southwest Texas, and northern Mexico, investigating the guayule plant as a possible substitute for Asian rubber. By March 1932, Ike’s work was complete, and he began working full-time for the Army Chief of Staff, General Douglas MacArthur

"My ambition in the Army was to make everybody regretful when I was ordered to other duty." 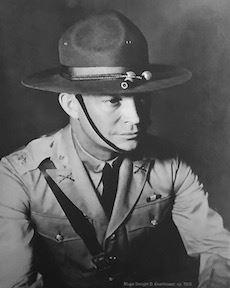 For three long years, Ike wrote interminable reports, letters, and speeches. Often at his desk twelve or more hours a day — sometimes seven days a week — Ike was bored and frustrated. It seemed that his career was at a standstill, and working for General MacArthur did nothing to disavow him of the notion. He longed for challenging staff work or an assignment with troops. But, MacArthur, who was growing dependent upon his very capable assistant, had no intention of letting him go.

When MacArthur’s tour as Chief of Staff was up in late 1934, he asked Ike to accompany him to the Philippines. Here MacArthur would serve as a military advisor to President-elect Manuel Quezon. Ike did not want to go to the Philippines nor work for MacArthur, but he found it impossible to refuse. As he prepared to leave for the Philippines in 1935, Ike grudgingly promised himself that this assignment would not be long term.

The years from 1927 to 1935 were happy ones for the Eisenhower family. When Ike and Mamie moved to Washington, D.C., they took out a lease at the Wyoming apartments near Dupont Circle. Ike’s old friend “Gee” Gerow and his wife, Katherine, lived there too. The Wyoming was within walking distance of the State-War-Navy building (later renamed the Dwight D. Eisenhower Executive Building) where Ike worked. But the year the Eisenhowers lived in Paris, from 1928 to 1929, was, by far, the happiest time for them.

In late July 1928, the Eisenhowers, including young John who would celebrate his sixth birthday at sea and Mamie’s parents, set sail for France. They found an apartment in Paris, located on the Right Bank of the Seine River, close to Pont Mirabeau. Ike and Mamie even took French lessons. Mamie was not a serious student, but Ike was and he was perpetually frustrated with this inability to speak or understand the French language. Son John, on the other hand, became fluent in French in their year abroad. John and his friend “Bo” Horan often accompanies Ike on his travels through the French countryside. Now and then, Mamie are along as well.

Before returning to the United States in September 1929, the Eisenhowers and their friends, the Grubers, took a 17-day road trip through Belgium, Germany, and Switzerland. When Ike and his family returned home in September 1929, the America economy was fluctuating erratically, and the greatest economic disaster in American history was weeks away.

By 1932, the Great Depression had worsened considerably, and millions of Americans were without work or hope. Ike was fortunate to have a secure job, although his salary had been reduced by 20 percent. His job at the War Department required civilian clothes, an added expense on an already-tight budget. John Doud, however, always made sure that Mamie had a new car and provided her with a maid, who doubled as a cook, for $50 month.

Milton Eisenhower and his wife, Helen, lived in Washington, D.C., too, and, on Saturday afternoons, both Eisenhower families would gather to listen to Army football games on the radio. In 1933, four of the Eisenhower “boys” — Edgar, Milton, Earl, and Ike — had a reunion of sorts in Washington, D.C. Assessing his brothers’ outward signs of material success, Ike felt that he, by comparison, was a failure. Yet, when he was offered a civilian job at three times his Army salary, he did not hesitate to turn it down.

“Club Eisenhower” continued to be a popular spot for family and friends. There were weekly card parties where Mamie charmed her guests and entertained them at the piano. The Gerows were regular guests, and, of course, Milton and his wife visited often. Milton introduced his older brother as a man who was “going places” to his friends and colleagues in Washington’s elite inner circle. Upon meeting the 45-year-old still “Major” Eisenhower, they wondered at Milton’s pronouncement.

This content is from The Eisenhower Life Series:  Duty, Honor, Country, an educational series written by Kim Barbieri for the Eisenhower Foundation, copyright 2002. Funding was provided by the Dane G. Hansen Foundation and the State of Kansas.