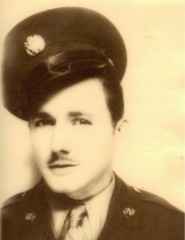 David A. Baier was inducted into the army at Ft. Leavenworth on October 13, 1942. He attended boot camp in Missouri followed by radio school in Washington, DC. In January 1943, he was sent to radar school and diesel motor school in Florida. Later in the year, he was promoted to Sergeant and was part of the company cadre training new recruits. In July 1944, he took a troop train from Tampa, Florida to San Francisco, California to be deployed to the Pacific. He arrived in New Guinea on August 9. He was with the 595th Signal Air Warning Battalion. He was transferred to Biak Island about the time of the Battle of the Caves. He later rejoined the 595th in New Guinea. In August 1945, David was loading equipment onto LST's in New Guinea when they received the news that the atomic bomb had been dropped. He was on a ship in the Coral Sea sailing to the Philippines when Japan surrendered. While in the Philippines, he was promoted to Staff Sergeant. He was sent back to the States on December 12, 1945 and was discharged at Ft. Logan, Colorado on February 2, 1946. He re-enlisted in the army reserves and was home two hours before his wife, Corlia, died of tuberculosis. Shortly after, he had an X-ray taken and discovered that he had tuberculosis. He was hospitalized in Leavenworth, KS, and underwent experimental surgery. The doctor collapsed part of David's lung to try to stop the disease. David was one of the first to survive the surgery. Not long after, they began experimenting with antibiotics which proved to be a more successful treatment for TB. After recovering in Springfield, MO, he was discharged from the reserves in 1949 and returned to Abilene. He married Thelma Lee in 1951 and moved to the farm south of Abilene, at Donegal, where he resides today.