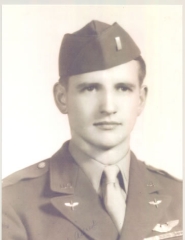 Howard Allred is one of Four Brothers who all served in World War II (William Boyd Allred, James Rex Allred, and Walter Lee Allred). A fifth brother, 1st Lieutenant Samuel Aaron Allred served in the Korean Conflict. Howard graduated from flight training in the Class of 44E at LaJunta, CO. He was trained to fly the B-25 medium bomber. Just as he graduated, his Commanding Officer announced that since he was trained to fly twin-engine aircraft, he and several of his class would be shipped to Coffeyville, Kansas, to transition and fly the P-38. Then, since they could fly the P-38, several of classmates were assigned to fly the photo version: F-5. Guns were removed from the nose and cameras installed. They were taught to photograph targets while flying above 20,000 feet. Howard's first assignment was in Bari, Italy, to the 15th Air Force to support the missions of the B-17s. He was then assigned to the 12th Air Force, in Florence, Italy, to support the medium bombers---B-25, B-26. He flew 53 combat missions, and was awarded the Air Medal five times, and also awarded the Distinguished Flying Cross. Howard was in the 12th Photo Reconnaissance Squadron, 3rd PR Group, 90th PR Wing, 12th Air Force. After the war Howard was soundly converted in his Methodist Church, answered the call to preach, graduated from Guilford College, AB, 1949, the Divinity School, Duke University, Master of Divinity, 1952, and received the honorary Doctor of Divinity, 1990, from High Point University. He served 43 years in the Western North Carolina Annual Conference of The United Methodist Church as a pastor and District superintendent. He received 5 Air Medals and the Distinguished Flying Cross. Howard retired in 1991. He has three children, six grandchildren, and one great-grandson.