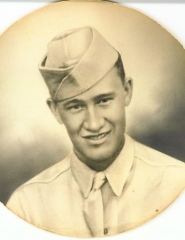 Glen G. Chaloupka was born on October 10, 1922 on his parents farm near Narka, Kansas. Glen was the only son of four children born to John and Margaret (Holan) Chaloupka; he was the second oldest. He attended country schools through his elementary years and then attended and graduated from Narka High School; graduating in 1940. From high school, he went to Manhattan, KS to attend Kansas State College of Applied Sciences and Agriculture (later known as Kansas State University). It was during his second year that he took an internship in Washington, DC. While in Washington, DC, he decided to enlist in the Army. He enlisted at Ft. Belvoir, Virginia and this is where he received his Basic Training. He was assigned to an Engineering Company after Basic Training. He was deployed to England in the Fall of 1943; returning to the United States of America in the Fall of 1945. He was part of the campaigns in Normandy (D-Day plus), Northern France, Rhineland, Ardennes, and Central Europe. He fought in the Battle of the Bulge. He was discharged from the Army on October 19, 1945. Glen did not share many details about his war experiences. One thing he did seem most proud of was that he helped build a bridge across the Rhine river in Germany. Upon his discharge, Glen returned to Kansas State College; using his GI Bill to help pay for his college expenses. He never did obtain that degree, but while at Kansas State College he met his future wife, Marcy Mae Thomasson. They were married on September 15, 1946. They settled in Belleville, Kansas. They had two daughters, Barbara Joyce Chaloupka Splichal and Marcy E. Chaloupka Johnson. Glen worked for Republic County Engineering Department for several years. In 1954, Glen bought the grain elevator in Narka, Kansas; moving his family back to his hometown. He ran a successful business for the next ten years; selling his business in 1964. At this time, he started working at the Munden State Bank as the Agriculture Representative. He worked there for the next 25 years until retiring. His retirement years were spent enjoying his family; especially his grandchildren. All of whom learned to play cards with Grandpa Glen and a highlight of any game was 'beating Grandpa'! Glen passed away in October of 1999.