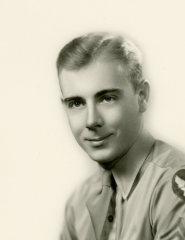 Our dad, Marvin, grew up in Atwood, Kansas. For his senior year in high school, he attended Kemper Military Academy in Missouri. He then enrolled in the University of Kansas (KU), majoring in business administration and completing two years in the Army ROTC program. In the fall of 1942, following his third year at KU, Marvin decided to move to Wichita and join the Cessna Aircraft Company. He received training in blueprint reading and became a chief dispatcher in the production control department. At the time, Cessna was building the CG-4, a military glider, and Marvin aspired to join the Army’s Glider Corps. Perhaps fate was on his side as he was turned down due to his poor eyesight. The gliders, being made of inexpensive wood and metal, proved to be perilous to those who flew them in the European theatre. Three weeks after the Japanese attack on Pearl Harbor, Marvin was inducted into the Army Air Forces at age 22. He served for three years and 18 days. Most of his time was spent training pilots in a “Link Trainer,” a flight simulator made famous during World War II as a key pilot training aid by almost every combatant nation. Created out of the need for a safe way to teach new pilots how to fly by instruments, more than 500,000 U.S. pilots were trained on Link simulators, as were pilots from Australia, Canada, Germany, Great Britain, Israel, Japan and the USSR. Marvin became certified as a Link Trainer Instructor in both instrument flying and celestial navigation. He was assigned to several stations: Chanute Field in Illinois (130 miles south of Chicago); Geiger Field, in Spokane, Washington; and Peterson Field, near Colorado Springs. Following the Japanese surrender in September 1945, Marvin, perhaps out of a desire to do greater good, joined the Army’s Counter-Intelligence Corps and received special training in Camouflage, Demolition, and Mines at Holabird Signal Depot in Baltimore. We remember him sharing how, in the middle of a class session, a man ran in, fired a 45 automatic pistol several times at the instructor and ran out. The instructor, who had collapsed on the floor, rose to his feet and said, “OK – write down the details of what you just witnessed.” Marvin explained, “We learned some Japanese, how to cover our tracks when doing counter-intelligence work, and other ‘cloak and dagger’ secrets.” When his service ended in 1946, Marvin returned to Wichita and went to work in his father’s mortgage finance business. Over the next 60 years, he transformed the family business into Fidelity Bank, which today is in its fourth generation of Bastian family ownership with his grandson, Aaron, at the helm.