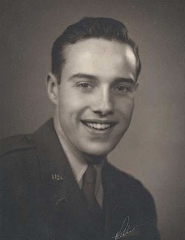 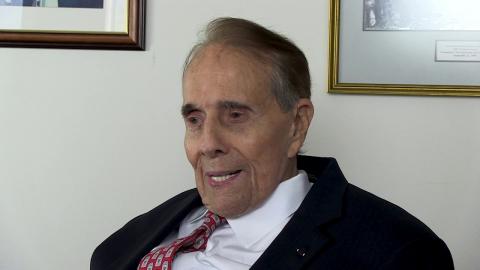 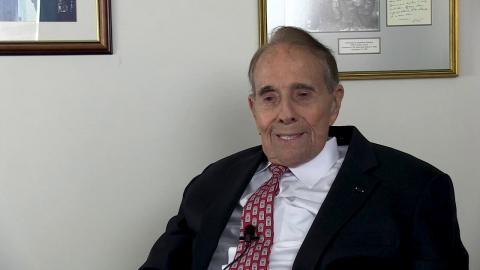 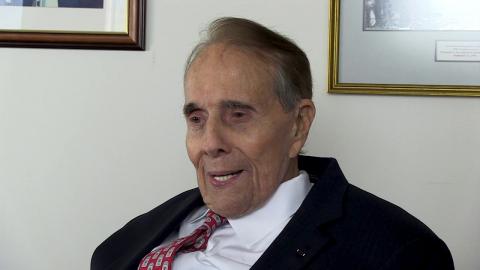 The eldest of four, Bob was born July 22, 1923, to Doran and Bina (Talbott) Dole. During the Great Depression, his family moved into the basement of their small frame house and rented out the main floor. He took many odd jobs as a boy, including as a soda jerk. Graduating high school in 1941, he enrolled in the University of Kansas, earning a coveted spot on the Jayhawks' basketball team and joining the Kappa Sigma fraternity. His studies interrupted by WWII, Bob joined the Army's Enlisted Reserve Corps and was trained as an anti-tank gunner. After officer candidate training, he was appointed a Second Lieutenant in the 10th Mountain Division as platoon leader. On Apr 14, 1945, his company ran into intense enemy fire while attempting to take Hill 913 in Northern Italy. Witnessing his radioman go down, he jumped up and pulled his lifeless form into the foxhole. Jumping out again, he was hit in the back by German machine-gun fire. After waiting nine hours on the battlefield for evacuation, he was not expected to live. Extensive wounds paralyzed his right arm. Bob began his recovery at the Percy Jones General Hospital in Battle Creek, MI. It now houses federal offices and is known as the Hart-Dole-Inouye Federal Center, named for him and two fellow disabled veterans. Twice decorated for heroism, Bob received two Purple Hearts and the Bronze Star Medal with combat 'V' for valor. Knowing the family did not have the funds, his hometown of Russell raised the money for his operations and rehabilitation. Later, clear he would never realize his boyhood dream of becoming a doctor, he set new goals to study law and give back to the people who had done so much during his four year recovery. Bob attended the University of Arizona from 1948-1951 and earned his law degree from Washburn University in 1952. With no memorial dedicated to those who served in WWII, he sought to make sure an appropriate monument was built before too many more of the 'greatest generation' passed away. As President of the WWII Memorial Commission, he was active in fundraising and building public support. He also served one term in the state legislature, four as Russell County Attorney, four in the U.S. House of Representatives, the U.S. Senate from 1968-1996, was President Ford's 1976 running mate, and the 1996 Republican presidential candidate. In 1996 he was awarded the Presidential Medal of Freedom. After retiring from public office, he re-entered private law practice. Dole has written several books, including one on jokes told by the Presidents of the United States, in which he ranks them according to their level of humor, and also published his biography, 'One Soldier's Story: A Memoir.' On July 22, 2003, the Bob Dole Institute of Politics was dedicated on the University of Kansas campus in Lawrence. Former Sen. Bob Dole received the Congressional Gold Medal on January 17, 2018, in recognition of his service to the nation as a 'soldier, legislator and statesman.” Although he left the Army as a captain, in 2019 Congress voted to promote Dole to Colonel in honor of his service. Bob has been married to former U.S. Senator Elizabeth Hanford Dole since 1975. During his Ike's Soldiers interview, Dole stated, 'Eisenhower was my personal hero.'