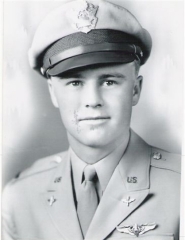 Verl Dean 'Andy' Anderson had attended College of Emporia at Emporia, KS, for 2 years on a football scholarship when he was inducted into the Army Air Corps on February 7, 1943. Following gunnery school at Kingman, AZ, he was sent to Carlsbad, NM, where he completed Bombardier-Navigator School. He was assigned to the 8th Air Force, 2nd Air Division, 453rd Bomb Group, 733rd Squadron out of 'Old Buckenham' airfield two miles southeast of Attleborough, Norfolk, England, and later served with the 466th Bomb Group, 786th Bomb Squadron based there. He was the bombardier-navigator on a B-24 Liberator, 'One Meat Ball', which was shot down over Germany. After making their way back to France, moving at night and with the help of sympathetic Germans, the crew was assigned to 'Hot Stuff', another B-24 Liberator. His crew flew 30 missions over enemy territory. Many of these missions were led by Group Operations Commander Jimmy Stewart, actor and war hero, in whom the men had complete confidence and respect. Verl remembers that when the crew reported for briefing prior to a mission and saw him in flight gear handling the briefing, they knew they were going into an especially dangerous assignment-and all attended chapel prior to the mission. Besides strategic operations, they engaged in support and interdictory missions, bombed V-weapon sites, airfields, and gun batteries prior to the invasion of Normandy, bombed German communications during the Battle of the Bulge and took part in the airborne assault across the Rhine in 1945. Battles and campaigns were Rhineland, Central Europe, and Ardennes. He received the Air Medal with Three Oak Leaf Clusters and was discharged as a 1st Lieutenant at Fort Leavenworth. After his discharge, he enrolled at The University of Kansas, where he was a member of the baseball team two years (1945-47) and had the great pleasure of being in legendary basketball coach Phog Allen's class and playing golf many times with him. Verl received his BS and Masters in Education from KU and then taught and coached one year in WaKeeney (1947-48); was a coach, teacher, Principal, Assistant Superintendent of Schools and Superintendent of Schools in Russell from 1948-76; and Assistant Superintendent of Schools in Abilene 1976-88, retiring after 41 years in the field of Education.