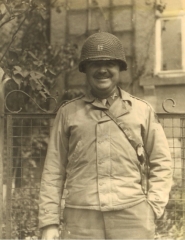 Vernon S. Atwood enlisted in the horse cavalry at Ft. Oglethorpe, Georgia at the age of 20. His first assignment outside of the continental United States occurred when he re-enlisted in 1937 and was attached to the Coast Artillery Corps and sent to Panama. He came up through the ranks. In 1942 Vernon applied for OCS and was sent to Ft. Riley, Kansas becoming one of the fabled '90-day wonders.' Upon completion he was commissioned a 2nd Lieutenant. He took part in WWII's bloodiest battle, the Ardennes: Battle of the Bulge. Vernon proudly served in the famed 9th Armored Division, 89th Cavalry Reconnaissance Squadron (mechanized) participating in the capture of the Remagen Bridge on March 7, 1945. He received his first Bronze Star in 1945 which read in part: {Capt. Atwood was decorated for his work in Germany last April, when he led reconnaissance troops ahead of a tank battalion spearheading through enemy territory. His mission was to keep driving forward, gathering information and uncovering enemy strong points. According to the citation, 'the success of the operation was due largely to the brilliant leadership and keen foresight exercised by Captain Atwood.'} His military campaigns included Rhineland, Ardennes and Central Europe. He was awarded the following medals: Bronze Star Medal with 2 bronze oak leaf clusters; Meritorious Service Medal; Air Medal; American Defense Service Medal; American Campaign Medal; European-African-Middle Eastern Campaign Medal with 3 bronze service stars; World War II Victory Medal; Army of Occupation Medal with Germany Clasp; National Defense Service Medal; Korean Service Medal plus the Republic of Korea Presidential Unit Citation. When war in Korea broke out, Vernon served with the 70th Heavy Tank Battalion, Company B, Ft. Knox, Kentucky. After 20 1/2 years of military service, Vernon retired in January 1957 with the rank of Major. Three of his brothers also served their country during the war years by enlisting in the Merchant Marine, Army and Seabees. In 1941, he married Margaret McKean of Rossville, Georgia. They were married 38 1/2 years when he passed away in 1980. He is buried in the Chattanooga National Cemetery. Vernon and Margaret were the parents of two children. Their living heritage includes four grandchildren, Heath Walker, Adrienne Poteet, Stephanie Atwood and Mary Fields; plus two great-grandchildren, Isis Fields and Tanner Poteet.