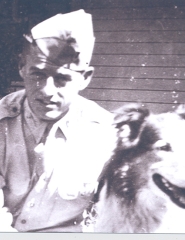 Lt. Koath Beichley fought in Tunisia, Sicily, and France as a Platoon leader and Tank Commander for the US Army 67th Armored Regiment. During his career, he was awarded the Silver Star, Bronze Star, and a Purple Heart. His Silver Star was given for gallantry in action. On July 12, 1943, northeast of Sicily, Lt. Beichley was in the leading tank of a detachment of his company. Four tanks of the detachment were destroyed by 88mm gun fire and the gun sights of his own tank shot out. Lt. Beichley after getting his tank in defilade, made a foot reconnaissance and discovered six German Tiger tanks approaching the flank and rear of his companies and the infantry position. He led his tank into position and directed fire on the German vehicles until his gun went out of action. This action was reported to account for three Tiger Tanks and two other vehicles destroyed. He was under continuous artillery fire during this engagement. This action also resulted in a field promotion from 2nd Lt. to 1st Lt by Commander General Patton. His Bronze Star and Purple Heart were given during the invasion at Normandy. On June 11, 1944, while engaged in transporting combat troops and tanks to assault beachhead in Normandy, France, struck one of the mines of the enemy beachhead defense approximately 7 miles off the French coast from Vierville, France. First Lt. Beichley, although dazed by the concussion of the explosion, organized evacuation teams from the unwounded personnel and directed the evacuation of wounded and unwounded from the sinking ship. After the word had been given to evacuate ship, he left the vessel only after he had personally made a complete search to determine that no wounded soldiers had been overlooked. The Purple Heart was given because of the concussion and injuries sustained from the blast. After the war, Loath returned to Kansas and began a career working with the Department of Agriculture, Soil Conservation Service, where he worked for over 30 years until his retirement. He died on May 17, 1985.