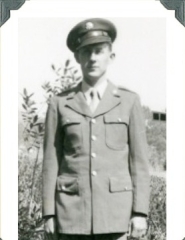 Sargent Raymond Theron Boyle served in the 'Mighty' 8th Air Force. As a trained electrician and munitions worker he participated in over seven air campaigns, including the D-Day invasion of Europe. His primary duties included repairing guns, and loading bombs, ammunitions and film for on-board cameras. While he served in relative safety behind the front lines, he was not removed from the realities of war. Family members indicated the war and his participation in it had greatly affected him. As a member of the ground crews, he was aware of planes that did not return from their mission. Aircraft that did returned required his services. This meant working in fuselages which contained the physical evidence of injuries and deaths sustain by the crew. Undoubtedly, he had some form of personal contact with the men that flew these missions. It is inconceivable that he was not affected by such loss.

In a May 27, 1945 letter home to his parents and younger brother Harry, our Uncle Ray wrote '... just finishing our V-Day celebrations.... Talking about coming home lately its just rumors here and there, but as I finally read in our Army paper, that some of the Eight Air Force (thats me) have already landed in the states. Surely good news.... I'm pulling night C.Q. (command of quarters) tonight. Have only the aircraft to keep me company.... We were suppose to have a parade and personal inspection by the General today but its been raining for a week now and it hasn't stop raining yet, not even for a general. Our work has been flying food to Holland and bringing back allies who were prisoners over there. It seems our job isn't done yet.... Going to close, want to light a fire before its gets dark. Lots of love - Your son Ray'