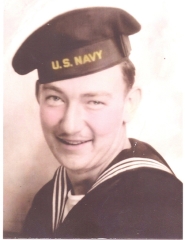 Biographical Comments: Lowell Dean Britt, DOB April 15, 1923, and DOD: March 2, 1999, WWII service 5/4/1944 to 3/16/1946 in Navy. He was also in the Army Air Force from 1946 to 1949. Dean Britt put together a testimonial of his life before his death in 1999. Not many dates are listed so it is necessary to provide estimates in some places in this biography of Dean. Dean grew up on a farm 3 miles west of Talmage, KS. His mother died when he was 15 years old in 1938. He was the youngest of 6 children of John and Myrtle Britt being born on April 15, 1923. I volunteered for the Navy (5/4/1944)'. (June 6, 1944 was D-Day in Germany on the beaches of Normandy.) 'I was sent to Great Lakes, Illinois for boot camp. and I was 22 years old.' 'From there I was shipped to Detroit, Michigan to serve as a Shore Patrolman on a Naval Base in the Detroit River called Gross Isle.' 'After 15 months of Shore Patrol (circa Sept. 1945).. I was sent to Little Creek, Virginia to train for LCM's-that's Landing Craft Mechanized.' (The Atomic Bomb was dropped on Hiroshima Japan on August 6, 1945) 'After a couple months training I was sent to Cuba to finish out my time in the Navy.' (discharged March 16, 1946). (WWII ended on Sept. 2, 1945) 'Once out of the Navy, I found civilian life wasn't so great. Jobs were hard to find. So, I packed my bags and eased out into the night, heading to the nearest recruiting center and I signed up with the Air Force---at that time it was the Army Air Force.basic training at Kelly Field, Texas.As a Private First Class. I was sent to Red Bank, New Jersey to signal corps school, electronic training. I was ordered to go to Chanute Field, Illinois to school to learn to repair Turbo Super Chargers and air craft in general. I was sent on detached service form Kelly field to Roswell, New Mexico to check our turbo super chargers on B-29's. In the lineup of about 50 B-29's was the BOX CAR and ENOLA GAY, which were the 2 B-29's that bombed Japan. I was transferred back to Kelly Field to finish out my time. I tried to sign over for another enlistment, but they would not allow it because I was married and had dependents. 'I decided to go to Topeka Trade school in electronics for repairing TV's, radios, and stereos. Dean worked for 13 years at Sears and a local Topeka TV repair business doing TV repair. He moved to Boise, Idaho in 1962 and started his own business 'Gold Star' Television repair. Dean later returned to Kansas and passed away leaving a 2nd wife and 5 adult children