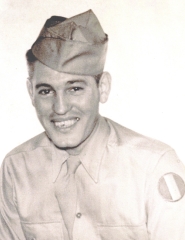 My name is Clarence R. Charles. I was born in Niota, Illinois in 1919. I spent most of my lift living in Chicago. Born into a railroad family, my grandfather, father and I worked for the Santa Fe Railroad almost all our lives. As I was working for the railroad which was classified as an essential war job, each time I was called up, the Army would defer me and send me back to keep the railroads running. I finally was inducted after a third try! I belonged to the 272nd Regiment, the Battle Axe Regiment, of the famous 'Fighting 69th' Infantry Division. I was part of the Anti-Tank Company. My Fourth Platoon was the demolition or the Mine Platoon. We served in the European Theater of Operations. My job was dangerous, but had to be done. We had to be careful of the anti-personnel mines that were placed around the anti-tank mines. They would jump up in the air and explore in your face. We marked off the small paths we cleared with white tape, so that the tanks knew where to go. I did my basic training at Camp Shelby, Mississippi. We experience boiling hot sun, torrential rains, and damp, penetrating cold. We then sailed from Camp Kilmar, New Jersey, on November 15, 2944, and arrived at bitter cold Lopscombe Corners, east of Salisbury, England, on November 26, 2944. The ocean voyage was calm, but the transport ship was extremely crowded. On January 21, 1945, we went to the front in the Eifel Forest area. Five days later, we had our first casualties from artillery fire. We were quartered in tents and log dugouts, eating K-rations and C-rations out of cans. Tasted just like dog food, but if we were lucky, we could build a small fire and heat the food up in our helmet. Later, when we found our way to Leipzig, we captured the largest railroad station in Germany. When we finally got to the Elbe River, we linked up with the First Russian Ukrainian Army. The Russian women soldiers were just as tough as the men. It seemed to me that every Russian soldier carried a machine gun and a bottle of vodka!