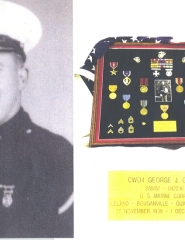 Active in ROTC at Harrison Tech. HS, I enlisted in the US Marine Corps Reserve in Chicago, IL on 27 Nov 1939 while a junior. That June, I trained at the Army CMTC, Fort Sheridan, IL. The USMCR placed me on active duty for training in July 1940 at Camp Perry, OH, and promoted me to PFC. On 7 Nov 1940, President Franklin D. Roosevelt declared a National Emergency and the 9th Battalion of the Marine Corps Reserve was called to active duty. We departed from Chicago for San Diego, arriving on Armistice Day, 11 Nov 1940, where the 9th was integrated into the 2nd Defense Battalion and we were assigned to the 50 Caliber Anti-Aircraft Sect. In Jan, most of us were transferred to the 2nd Battalion, 10th Marines, French 75mm Artillery. Now a Corporal, I relocated to Camp Elliott, CA, and in May to E Battery and 75mm Pack Howitzers. On May 31st we boarded navy Transport and sailed through the Panama Canal to Charleston, SC. I left there in late Jun, arriving at Argentia Bay, Newfoundland before sailing to Reykjavik, Iceland, arriving on 7 Jul 1941 with the 1st Marine Brigade. During our nine months in Iceland, we paraded on 16 Aug 1941 for Winston Churchill after his meeting with President Roosevelt at Argentia. On 7 Dec 1941, we were in a ton open truck in a snow storm going on liberty in Reykjavik when all British soldiers we passed kept giving us the 'V' sign and saying 'we are glad you are with us.' When we got to town we heard the Japanese had bombed Pearl Harbor. Mar 20th we again boarded the USS Heywood and returned to New York where I transferred to Camp Elliott, CA as a Sergeant. I was then transferred to the 4th Battalion, 12th Marines, 105mm Howitzers for a short time before being sent to New River, NC on 9 Jul 1942 to F Battery, 2nd Battalion, 12th Marines, 75mm Pack Howitzers. From there, it was live firing of the Pack Howitzers in the Desert at Camp Dunlap, Niland, CA. In Feb we were trucked to San Diego and boarded the SS Lurline, a Matson Liner as part of the 3rd Marine Division. We arrived in Auckland, New Zealand for training until July when we sailed to Guadalcanal, BSI for jungle training. It was here we first experienced Japanese air raids and I was promoted to Platoon Sergeant. Under air attack as we approached the landing beach, a bomber flew over our bow and sank the USS McLean on our port side. Our Survey section was aboard and all but one were saved. We were bombed two nights in a row with no casualties, although we lost one gun and our Galley. The Japanese fired their artillery nightly, but most of it went past us. Promoted to Gunnery Sgt., we sailed back to Guadalcanal in Jan, while the Army took over protecting the airfields. With the Japanese fleet attacking in the battle for Saipan, our D Day was re-scheduled with our landing to be in the 5th wave by transferring our Howitzers to Amphibian Tractors. When none were available, we landed from the LCVPs at the edge of the reef. We had to pile all the parts of the Howitzers and ammunition in the water on the reef and then carry it all to our selected positions; all while under mortar fire. After the Island was secured, we swept it and captured a few stragglers. They were all starving and did not but up any resistance. After my promotion to Warrant Officer, we sailed from Guam with the 3rd Battalion, 21st Marines and my artillery Forward Observer Team was assigned to them for the landing. I spent my 23rd birthday with K Co. onboard the LCVPs. The next day we landed on Red Beach under artillery and mortar fire. By the 5th day, we had captured Airport 2. Two grenades exploded right in front of me and I was slightly wounded in the face, while Capt. R. Heinze had fragments inside his left thigh from the same grenades. After capturing the high ground at the junction of the runways, our team spent the night there under ponchos, directing our artillery under mortar and artillery fire.