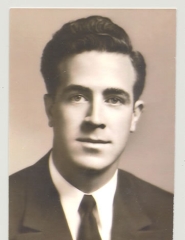 After his WWII service with the Naval Air Corps, Ray graduated from Wake Forest College with a B.A. Degree in 1950. He then joined the Federal Bureau of Investigation as a special agent from 1951-1953. This was followed by a year as the Atlantic Coastine RR supervisor and ten years as the manager of a hardware store. Later, Ray was the owner of the Ray Harris Real Estate & Appraisal Service from 1971-1981 which was affiliated with Century 21. In 1965, Ray turned his considerable talents to the political and government arena. From 1965 to 1968, he was the Director of the South Carolina Republican Party; 1968 to 1971 the State Chairman of the SC Republican Party; Delegate from South Carolina to the Republican national Convention 1976 in Kansas City, KS; Member, Republican national Committee from SC 1976-1980. On 27 October 1974, he received a Presidential Appointment (confirmed by U.S. Senate), Board Member, national Corp. of Housing Partnerships; 1984 Appointed Regional Administrator of HUD Region IV Atlanta, GA by HUD Secretary, Sam Pierce and reappointed in 1987 by then Secretary of HUD Jack Kemp; 1991 President Bush conferred the Rank of Meritorious Executive, Senior Executive Service, 'For Sustained accomplishments in Managing HUD Programs' in the 8 southeastern states, including Puerto Rico. In 1994 Ray retired from Federal Government service and returned to Darlington, SC. There he was the Director, Darlington County Economic Development from 1996-2003. Ray is retired now and enjoying life with his wife, Vi, their 6 children: Belva, Vi, Raymond, Lance, Mary, and Jammie, their spouses, and 15 grandchildren.