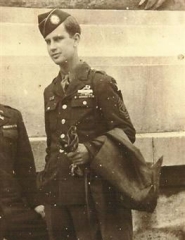 You don't forget it,' Don Deam said. 'You never forget that (D-Day).' Back on June 6, 1944, Deam was a paratrooper in the 101st Airborne. Just 19 years old and still in high school when he enlisted, Deam stood 6 feet tall, weighed 124 pounds and measured 24 inches around his waist. By the time he and other soldiers prepared to meet Nazi forces in the daring D-Day invasion, the U.S. Army first sergeant was known as 'General Toothpick.' Don Deam recalled that when veterans first came home, people didn't seem to want to hear the war stories. So he just put them behind him as a piece of history that was little discussed for years. But he has since been recording his memories from the past; calling war buddies to confirm his recollections. Among the passages Deam has written is one in which General Dwight D. Eisenhower visited with soldiers before D-Day. Eisenhower, who grew up in Abilene, Kansas, asked if any of the men were from Kansas. Another man pushed Deam forward. Although he grew up in Florida, Deam was born in Kansas and his parents were living in Manhattan. He remembers Eisenhower shaking his hand. Then he laid his hand on my shoulder and said 'Come back son'. Deam remembers flying toward France, seeing the white cliffs of Dover slip out of sight as his plane left the United Kingdom. Then he remembers the anti-aircraft and machine gun fire; the way the tracer bullets glowed red as they flew past. He remembers the bullets that ripped through his right arm after he hit the ground and fighting for days despite the injury. The night before they left for D-Day, his colonel gave a rousing speech from the hood of a Jeep. This was what they had been waiting for, the men were told. And at that moment, Deam was scared. His legs felt like rubber. 'I didn't want them to see me' he said of the men he commanded. 'I was the first sergeant.' So I walked behind my tent, threw myself on the ground and prayed. I didn't ask God to save me from being hurt or killed; I asked God to give me the courage to manage fear and guide me so I could do what a first sergeant was supposed to do in combat. On D-Day, he understood what it meant to be at war. 'This sounds like a ridiculously stupid statement,' he said, 'I wasn't scared'. By the time the war ended, Deam had earned a Purple Heart and Bronze Star. Near the end of his duty, he took a piece of Adolph Hitler's stationary from the dictator's Eagles Nest residence and wrote home. 'My warring days and parachute jumps are about over, and I'm not in the least bit sorry.', he wrote to his parents and siblings. 'All of my friends are gone.' After the war, Deam went on to get married and have two children. He worked for 35 years as an attorney. Donald Deam's memoirs are part of the World War II archives at the Eisenhower Presidential Library in Abilene, KS.