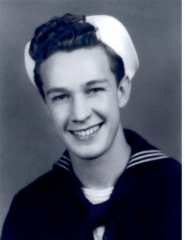 Lee graduated high school at Beatrice, NE in May of 1941. He began working full time at the apothecary shop where he had worked part time all through his high school years. However his plans and the plans of thousands of young men were changed on Dec 7, 1941 with the Japanese attach on Pearl Harbor. Lee volunteered for the U.S. Navy a few weeks later, but wasn't called to active service until February of 1942. He spent 12 weeks instead of the usual 16 weeks of boot camp at Great Lakes Naval Training Station near Chicago. Time for training was cut to the minimum in order to prepare these young men for overseas duty. Following boot camp, Lee was sent to Hospital Corps School and then picked for duty as Seaman 1st Class assigned to U.S. Naval Hospital, San Diego, then North Island Naval Base in San Diego. After further training there, he was one of 25 medics sent to a new troop ship, the USS Bladen and it was off to the South Pacific with the ship based at Guam. Before reaching Guam there was a stop in Hawaii and more training before being shipped out for destination unknown. This turned out to be Saipan, New Caledonia. From there the ship sailed to Hong Kong where 2300 - 2500 Chinese Nationalist troops and equipment were loaded aboard ship and transported to Tsingtao, China. Then it was back to Guam where American troops and equipment were loaded, again destination unknown, and this turned out to be Iwo Jima. These troops went ashore, Day 1, 3rd Wave of the bloody battle for Iwo Jima. After the troops went ashore the medics converted the ship to a hospital. It stayed about 500 - 1000 yards from shore during the day and casualties were brought aboard to be cared for. At night they moved out to sea for safety. The ship remained for 30 - 35 days caring for the injured brought aboard. Lee was there to see the flag raised on the hill of Iwo Jima. Soon after that historic event the USS Bladen returned to Guam with their cargo of injured fighting men. Lee's next assignment was aboard the USS Capricornus transporting troops to Okinawa. Here the troops also landed Day 1, 5th Wave. Again the ship was immediately converted to become a working hospital ship to receive the wounded and return to Guam. New Orders put the ship out to sea, destination unknown, and it was underway when the atomic bomb struck Hiroshima. They continued to Nagasaki and docked 19 days after the bomb struck there. In spite of his close contact with the radiation, Lee has been blessed to have had no ill effects, to his knowledge. The surrender was signed aboard the USS Missouri when he was at sea and the ship's orders were received to return home. The only leave from duty during the 47 months of service was a 9-day leave at the end of boot camp. He was formally discharged January 12, 1946. On January 26, 1946, Lee Phelps enrolled in the College of Pharmacy at the University of Nebraska in Lincoln. Thanks to the G.I. Bill, he graduated January 26, 1950 and passed the tests to become a registered Pharmacist. He is married to Ruth Phelps, and they have four children: son, Craig and daughters, Jan, Mary and Kay.