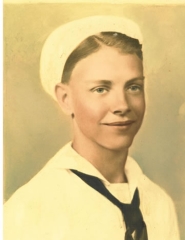 DIVISION:
Navy
,
USS Daniel A. Joy (DE-585)
THEATER OF OPERATION:
Pacific
Other
HONORED BY: His family

Warren was born June 14, 1925 in Natoma, Kansas, the third child of Millie and Ross Teasley. He was inducted into the U.S. Navy on November 13, 1943, after having been drafted during his senior year in high school. At the time, he was living in Washington, D.C. where his stepfather was working in the shipyards. He took his boot training at Sampson, N.Y. and then was sent to Radio School in Bedford Springs, Pennsylvania. In early 1944, he joined the crew of the U.S.S. Daniel A. Joy, a destroyer escort, soon after her shake-down cruise. He remained on board the Joy until the war's end. After escorting a convoy to North Africa, the ship went through the Panama Canal and proceeded to the Southwest Pacific and the New Guinea, Philippines and Okinawa Theaters of Operation. In November 1944, they were anchored at Manus Island close to the ammunition ship Mt. Hood when she blew up. Many were killed and wounded on both the Mt. Hood and nearby ships, but the Joy and her crew did not receive significant damage. Close to the end of the war, they were anchored in Okinawa and were ordered to sea to ride out a destructive typhoon. Several ships were sunk with loss of crew, but the luck of the Joy held and they came through with little damage. Warren received his discharge on April 17, 1946. He returned to Kansas and attended Fort Hays Kansas State College, graduating in 1950. He moved to Kansas City, Missouri and began a long career as an estimator in the millwork industry. In Kansas City, he also met his future wife, Eloise Good. They were married June 22, 1952 in Louisburg, Kansas. They had three children, Kathy Rogers, Kansas City, Missouri; Valerie Carstens, Fairfax, Iowa; and Brent Teasley, Lee's Summit, Missouri. In later years the greatest pleasures of his life were his wife of fifty-one years, his family including his six grandchildren and the annual reunions of the U.S.S. Joy. The reunions were always a time of renewing old friendships and reliving old memories. Warren passed away January 12, 2004, just four months after his last reunion.