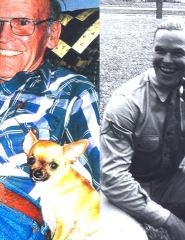 Sergeant Thomas received his basic training at fort Leavenworth, KS. Then, he was transferred to St. Petersburg, FL for advanced basic training in Chemical warfare. While in St. Petersburg, he was billeted in the city's hotels. One hotel was the Vinoy. Three men occupied one room using the hotel's furniture from which they enjoyed an ocean view. The Vinoy was a far-cry from ordinary Army housing on a military base. As a squad leader, Sgt. Thomas recalls marching his troops from the hotels to training on a prepared field outside of St. Petersburg. The marching was on the streets, through town and in traffic. Oral commands were needed to guide his squad through the city's congestion. Sgt. Thomas remained in the States for his entire enlistment. His primary MOS, 870, was to train troops in the discipline of poison gas warfare. Beyond St. Petersburg he was stationed at Lincoln Army Airfield, Lincoln, NE; Wright Patterson AFB, Dayton, OH; Kelly Field, San Antonio, TX; Tinker Field, Oklahoma City, OK and Victoria Airfield, Victoria, KS. On one occasion, while at the Lincoln Army Airfield, Sgt. Thomas arranged a training exercise that involved tear gas mixed with phosgene (smells like cut, green corn). When the gas canisters were activated, the troops were to break to the sides of their formation and move upwind from the gas. This time a trooper broke ranks and ran down wind with the expelled gas. He was seen to have outrun an unsuspecting rabbit that was caught in the maneuver. Sgt. Thomas recalls another training drill that involved familiarizing the troops with gas mask procedures. When the command, 'Gas!' was given, a soldier was to put on his mask and leave it in place until the, 'All clear!' was heard. The soldiers were not to remove their masks, however, until a prescribed series of steps were taken to insure that no gas was present in their area. The steps were: 1. Squat on heels in place. 2. With a finger pull part of the mask from face. 3. Take a quick sniff of gas to determine its type. 4. Clear the mask by exhaling. Even when the leader called, 'All clear!,' a soldier was to determine if gas was present in his area before removing the mask. The reasoning was that gas might be present in one area and not another, according to Sgt. Thomas. Sgt Thomas, now 88 years old, has not suffered any ill-affects due to proximity and handling of warfare gasses. He attributes his well-being to the thorough training he received from those who schooled him in chemical warfare. Sgt Thomas is Honored by his wife: Ila Marie Thomas; daughters: Sheryll Jean, Darlene Kaye and Joyce Ilene; Grandchildren: Dawna, James, Ryan, Lindsay, Emilie and Rachelle; and Neighbors: Lyle & Janice Brooks, David & Melva Sanner, Al & Jean Singleton, Jon Marks, and Kenneth & Susan Steinfort.