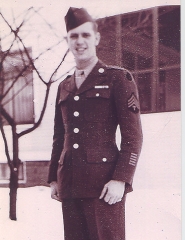 Harry W. Rodine, Jr. (dad) joined the army in February of 1941 as a 17 year old who falsified his age so he could be with his Uncle Chuck Pease. His boot camp training was at Fort Claiborne, Louisiana, and later he was transferred to Fort Dix in New York. In the spring of 1942 he and Chuck were sent to Europe to join the WW II fight against the hated Germans (Jerry's). Sometime after arriving in Europe, Dad and Chuck were split up and stationed in different battalions; Chuck, in the infantry and Dad in the artillery division. Dad eventually was promoted to the level of sergeant, heading up a crew of six that manned a huge cannon nicknamed 'Big Bertha'. During his 2nd year in Europe, it would seem ironic that Dad would meet his future bride through pen pal letters, and her mother's name would be Bertha. Barbara Jean Burns (mom) was a young nursing student in the spring of 1944, soon to graduate with an RN degree from the school of nursing at Norwalk General Hospital in Connecticut. As part of the nursing student's patriotic duty, they were asked to write to the GI's overseas, so as to bolster their morale during the long, dreadful war against the Germans. Dad had already been writing to a nursing student named Grace, when, for whatever reason, Grace gave Barbara his name. What started out as friendly letter writing, turned into a love affair that resulted in marriage, a union of 44 wonderful years which is carried on through 4 children, 7 grandchildren, and 5 great grandchildren. Mom kept the letters that Dad sent to her over the 2 years that they wrote to each other. Dad fell in love with a picture and words mom wrote on sweet smelling stationary. Meeting mom in person for the first time on January 26, 1945, only confirmed his love for her. The rest of the story is our family history.