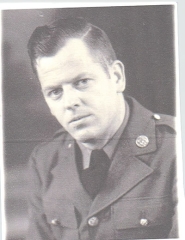 EJ was one of four brothers (William-Army, Harold-Navy SeaBees, and Raymond-Navy) who served in WWII. He enlisted on August 21, 1942 and reported to Leavenworth, KS on September 4, 1942. After six weeks of basic training in Camp Robinson, AR he then went to Fort Slocum, NY. After 16 days in Fort Slocum, he boarded the ship Chateau Terry in Brooklyn and arrived in Iceland on December 4, 1942. While in Iceland he received training as a surgical technician. After being in Iceland for over seven months, he sailed on the Mariposa to Bournemouth, England. He was in England for a couple of months when he received his orders. He sailed out on the Santa Paula to Kilkeel, Ireland, where he obtained additional training as a medic. In July 1944, he was on a Personnel Carrier to St Lo, Omaha Beach. There he treated wounded soldiers. On November 9, 1944, Ernie was hit on his right hand and sholder by shrapnel. He was taken to a field hospital, then to Paris, France and later to the hospital in England. It was there that they amputated his right index finger. After receiving medical care he returned to the States by boat. On July 2, 1945, he began his out processing while at Brooke Convalescent Hospital, Fort Sam Houston, Texas and was discharged on July 4, 1945. Battles and campaigns included Normandy and Northern France. He received the European African Middle Eastern Services Medal, the Good Conduct Medal and the Purple Heart.