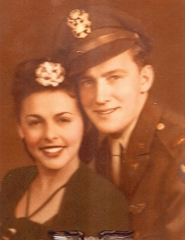 John was a pilot who flew the B-17, DC3 and C-47 in England, Germany, and other areas in Europe. He was born to Ole and Cecelia A. (Larson) Watne on 11 May 1923. He had 3 brothers who also served in WWII (2 in the Navy and 1 in the Army Air Corps). We received three Air Medals, EAME (Europe, African, Middle Eastern Theater) Medal and Ribbon, three Battle Stars, and the Good Conduct Medal. After his discharge, he was manager of the Plumbing and Heating Department at Sears and a master plumber for 39 years. He was a member of the Great Falls Lutheran church and served as their treasurer, the 100th Bomb Group, VFW, the Daedalions, and the Cascade County Sheriff's Posse. In addition, his name is listed on the Veterans Memorial, Great Falls, MT. He married the former Mary Scaglione in Tampa, FL on 20 November 1944. They had 5 children: Carolyn, Linda (stillborn), Ronald, Richard, and Christine.