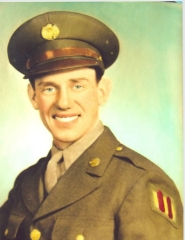 David was one of twelve children born to Ruby and Ira Weatherford. He is married to Garnet Weatherford since 27 June 1941. They have two children, Nancy and John and two grandchildren, Brooke and Daniel. David was drafted into the army in October 1943. He served with the 657th Field Artillery; TSFET Motor Pool. He went through basic training and duty at Fort Tilden, NY with the Coast Artillery. In Jan 1944, he was stationed at Camp Rucker, AL in the Field Artillery, B Battery. In Nov 1944, he was sent to Fort Sill, OK and in Jan 1945, to Camp Chaffee, AR. He then went to Camp Kilmer, NJ before heading to Europe on Feb 4th or 5th, 1945. David stayed in Cheltenham, England for a week and then on to Dieppe, France to get 8' guns and other equipment. He set up guns near Pontivy, France to point at Lorient. He dug a fox hole and manned his armor piercing, water cooled, .50 caliber. Belt fed, machine gun from that fox hole. On May 8, 1945, as one of the trucks returning from taking showers passed David's fox hole, the GIs yelled, 'The war is over!' It took a few days to pack their equipment and then his outfit headed to Cologne, Germany. In Cologne, David was given a carbine rifle to take the place of his M-1 rifle. He was then sent to Straubing Germany. While there, he received a letter from his brother, Harvey Roger Weatherford, who was in Pilsen, Czechoslovakia in the 8th Armored Division. Harvey was able to spend 3 days with him in Straubing. They were both excused from all duties for those 3 days by their commanding officers. They both slept in David's pup tent and ate with David's outfit because they weren't allowed to eat in German restaurants. They bathed and washed their clothes in the Blue Danube River. Next, David was sent to Regensburg and there got orders to prepare to go to Japan. Two days later, those orders were put on hold because an atomic bomb was dropped on Japan by the U.S. and soon all of WWII was over. His outfit became an occupational outfit and was moved to Frankfurt, Germany. David was lucky enough to get to work out of the Frankfurt motor pool. The captain was Captain Harrington. David took orders from Colonel Ramsey and 14 other officers under Colonel Ramsey. One of his duties was to go to Paris with thirteen other volunteers to pick up 14 additional cars to bring back to Frankfurt. David was then assigned to Colonel Withers at T.S.F.E.T., the second highest headquarters in Europe. Because he was not officially assigned to the motor pool, his outfit in Wiesbaden thought he had been AWOL for 3 months. David drove Colonel Withers to General Eisenhower's headquarters. There, Eisenhower wrote a note for David to give to the officer in Wiesbaden. It said, 'Give Sergeant Weatherford his records and all his papers at once. He has not been AWOL. He has been driving for the motor pool and our office personnel for the past three months.' Signed Dwight D. Eisenhower. In the middle of March 1946, David found out he had enough points and years of service to be discharged. He rode on a cattle truck to Le Havre, France from Slinging, Germany. He landed by boat at Camp Kilmer, NJ, where he had started his overseas experience in 1945. David was honorably discharged on Easter morning, 1946 at Camp Atterbury, IN. David and his wife, Garnet, went on a four week vacation to California and back to celebrate his safe return after serving his country. He received a Good Conduct Medal and a third stripe before he was discharged.