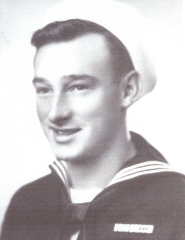 John was born on May 17, 1925 in Chicago, Illinois and enlisted in the Navy on Aug 5, 1943. He took his boot training at the US Navy Training Center at Great Lakes, IL. Upon completion of training he was sent to the Asiatic Pacific Theater, sailed to Noumeda, New Caledonia and arrived there on October 23, 1944. He was assigned to the Destroyer DD-478, he reported aboard at Espiritu Santo, New Hebrides on Jan 29, 1944 and assigned as a Gunners mate on the bow's 40mm Gun. The USS Stanly was with Destroyer Squadron Twenty Three known in the Navy as the 'Little Beavers' commanded by Commander Arligh Burke at the battle of Bougainville, British Solomon Islands. By Feb 15, 1945, the Stanly participated in the Bismarck Archipelago Operation, Palau, Yapp, Ulithi, Woleai Raid, Marianas Operation and the Philippine Sea Frontier. They participated in the Landings of Mindoro, Lyingayen, Philippines, Iwo Jima and Okinawa Gunto. While participating in the Okinawa battle which resulted in the most vicious Kamikazes attack of the war the Destroyers and Destroyer Escorts acting as pickets received the most casualties of the Pacific War. One day while on picket duty the Stanly was attacked by what was called a 'Buka Bomb.' Basically a torpedo with short stub wings and twin tails manned by a single pilot that was flown to the area and dropped by what was called a Betty Bomber. The pilot would dive and aim his bomb at a ship. This day it came right at the Stanly aimed at the bow and struck directly below the 40MM gun mount that John was firing. It went right through the bow into the ocean with out exploding. It was a dud. The Stanly, with five others in the Destroyer Squadron Twenty-Three, received the Presidential Unit Citation for action during the Solomon Islands Campaign. In addition, John received the Asiatic-Pacific with 3 bronze stars, Silver Star, Philippine Liberation with star, American Theater, WWII Victory, and Good Conduct Medals. He was discharged at where he enlisted on March 4, 1946.