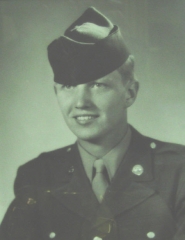 Frank Denius grew up in Athens, Texas, and graduated High School at Schreiner Military Institute in Kerrville, Texas. While continuing courses at Schreiner, the attack on Pearl Harbor occurred and thereafter he enlisted in the Army at 17 years old. Frank was initially dispatched to the Citadel Military Academy. After basic training at Camp Roberts, Frank was transferred to England in preparation for the D-Day Invasion. Assigned to “Old Hickory,” the 30th Infantry Division, Frank Denius was a forward artillery observer in Battery C of the 230th Field Artillery Battalion. Denius landed on Omaha Beach on June 7 (D-Day+1) and was engaged in all five major battles of the European Theater, including 'Operation Cobra' at St. Lo, the breakthrough battle into France. During the famous stand at Mortain, Denius was one of just 700 Allied soldiers on Hill 314 who were cut off for six days as they were surrounded by 70,000 German troops and 6 armored divisions. During this intense battle, the nearby 230th Artillery emptied some of their non-artillery shells and filled them with medical supplies. Frank Denius directed the shelling of his own position and at least some of the critically needed supplies landed intact to treat the wounded. Ordered to hold the hill at all costs, Denius directed artillery fire that decimated the massive German counteroffensive. Hill 314 was successfully defended, stopping the Germans’ march to the sea, which would have divided the Allied Army as they began their critical advance into France. His unit later broke through the Siegfried line, then fought in the Battle of the Bulge. Staff Sgt. Denius was awarded two Purple Hearts, four Silver Stars and the Presidential Citation, making him one of the 10 most decorated soldiers of the European Front in World War II. Denius returned home in 1945 and enrolled in the University of Texas. He was blessed with 64 years of marriage to his beloved wife, Charmaine, and they have two children. Denius was a devoted fan and supporter of the University of Texas. He continued to practice law in Austin and gave generously of his time and talents throughout his life. With the help of historian Thomas M. Hatfield, Frank Denius chronicled his war experiences in an autobiography, “On the Way: My Life and Times,” published in 2016. At wars end, General Eisenhower ordered Col. S.L.A. Marshall, chief historian for the Army, to evaluate all units that fought in the European Theater. Marshall determined that the 30th Infantry Division was the “top rated” division and recommended that it be awarded the Presidential Unit Citation, however, an Army award policy change prevented it because "Old Hickory" was a National Guard Division. Some 70 years later, efforts were renewed to recognize the Division’s heroic service, a story detailed in the documentary, 'Heroes of Old Hickory.' At last, on March 17, 2020, President Trump announced the Army would award the Presidential Unit Citation to the famed World War II National Guard unit, the 30th Infantry Division, for extraordinary heroism at the Battle of Mortain, France, in 1944. Rest in peace, Staff Sgt. Denius.