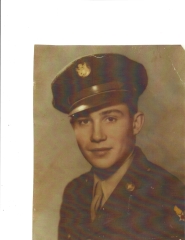 Dean was born on a farm west of Garner Iowa where he grew up and is the oldest of three siblings. His father served during WWI with the Rainbow Division in France. Dean was always crazy about airplanes and just wanted to fly. He also felt the need to serve his country, so he enlisted in the Army Air Corps in pilot training in 1943. He attended basic training in Amarillo TX and passed all tests but was disqualified from pilot training due to missing a digit on one of his fingers. It was felt at the time he would not be able to flip the toggle switches. After being disqualified from pilot training he then went to Tech school at Lowry Airfield in CO. After Tech school he then went to gunnery school at Tyndall Airfield in FL. He then went to Springfield NH where his crew was put together and assigned to B-24 Liberators. He was assigned to the ball turret position. His crew was then sent to Chatham Airfield in GA for extensive crew training. After crew training his crew was sent to Langley Airfield in MA where they were assigned to a brand-new B-24 Liberator and flew overseas to Bari Italy where they were assigned to 15th Air Force, 450th Bomb Group, 740th Bombardment Squadron (H) where he completed his 35 combat missions. His missions were completed at a time when there was fighter escort, and he remembers the first 15 missions they had full canisters of ammunition but after that it was cut in half. On his first mission his first thought was what the heck did I get myself into! but he became a seasoned ball turret gunner. Upon completion of his 35 missions, he returned to the USA and was sent to a base in Santa Ana CA for reassignment and sent to Kerns field in UT and assigned to Administration where he completed his service and was honorably discharged in 1945. His service awards include American Campaign Medal, WWII Victory Medal, Air Medal with 3 oak leaf clusters, Good Conduct Medal and European/African/Middle Eastern Campaign Medal. Dean returned to Garner IA where he then attended college earning a Degree in Associates Science. In 1947 he purchased a trucking company which he ran for 14 years. In that same year he married Doris. Dean and Doris raised a family of 3 boys and 1 girl. In 1961 he purchased 188 acres of land to start farming. He purchased an additional 200 acres in 1964 becoming a full-time farmer until he retired in 1996. When asked what experiences he would like to share about his service time he produced four. (1) he felt every time he climbed down into the ball turret it would become his coffin. If the plane ever went down, he would not have been able to get out by himself and he could not wear a parachute in the turret as there was not enough room, (2) how COLD! it was up there, (3) the FLAK. The sky would be "just black with it you,  could walk on it" and (4) he felt he had the best seat in the house on bombing missions. He could watch the bombs drop then disappear and see the explosions on the ground when the bombs hit their target. Dean still calls Iowa home today.