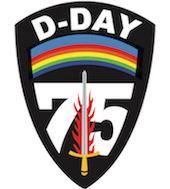 The 75th commemoration of June 6, 1944, when Supreme Allied Commander Dwight D. Eisenhower led the Allied troops on the pivotal D-Day invasion of Normandy, France, was held at the Eisenhower Presidential Library and Museum. The ceremony included highlight speeches from General Richard Myers, USAF (Ret.), President of Kansas State University and former Chairman, Joint Chiefs of Staff, and Mary Jean Eisenhower, granddaughter of General Eisenhower. Perhaps the most memorable part of the day was the gathering of over 70 veterans, Rosie the Riveters, and survivors of World War II. These individuals were special guests and were treated to lunch and a sneak peek of the Museum.

A few veterans present at the commemoration had actually met General Dwight D. Eisenhower. As depicted in the photo at left of veteran Ralph (Gene) Lentz saluting the statue of General Eisenhower, many expressed their admiration for Ike’s role in the D-Day invasion. Visitors attending the commemoration were enthused to meet World War II veterans and savored the stories they shared, both in person and for the video crews capturing firsthand accounts for the Eisenhower Foundation’s Ike’s Soldiers website.

“It was a great day for both of us!” Sandra Sullivan commented for herself and husband Jack Leon Miller, who watched the Japanese surrender in Tokyo Bay through binoculars. Sandra recently called to share Jack passed away on July 13. She revealed that Jack had “the time of his life” at the 75th Commemoration. She continued saying, “Thank you so much for doing this, and I hope you know how appreciative the veterans felt toward the Foundation for organizing the Commemoration.”

Other veterans expressed their gratitude for the tribute they received at the ceremony, but it was the general public and staff who were most honored to be in the presence of those who served and to remember those who gave their all for the freedoms we enjoy today.