“My wife thinks [retirement] is just a word in the dictionary.”

On January 20, 1961, Eisenhower’s presidency ended, and John F. Kennedy’s began. As a two-term President, Eisenhower had kept the nation out of war. He had been a faithful and trustworthy leader. After half a century of hard work, it was time for his retirement. He more than deserved it.

Upon entering the office of the Presidency, Dwight Eisenhower had resigned his permanent commission as General of the Army. President Kennedy reactivated his commission as a five star general in the United States Army. With the exception of George Washington, Eisenhower is the only United States President with military service to reenter the Armed Forces after leaving the office of President.

After leaving the White House, Ike and Mamie went to live at their 190-acre farm in Gettysburg, Pennsylvania. They had bought it in 1950, and it was the only home they ever owned. It is located next to the famous battlefield of the Civil War and not far from the land on which Eisenhower’s grandfather, Jacob, had lived before heading west.

While a modest farmhouse on the outside, their retirement home was filled with elegant furnishings, the pick of the hundreds of gifts Eisenhower had received over the years from heads of state and American millionaires. Ike and Mamie had had to be separated so much during their marriage, but they made up for it now by spending long hours together on their sun porch, overlooking the fields, reading, watching television, or painting. 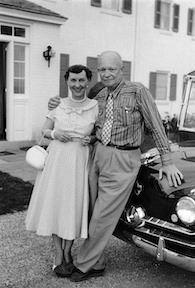 Figures from the Kennedy Administration often visited to brief him on issues and get his advice. In 1961, Eisenhower was startled by what he considered poor planning for the Bay of Pigs invasion of Castro-controlled Cuba, a disaster that took place just months after Kennedy entered the White House. 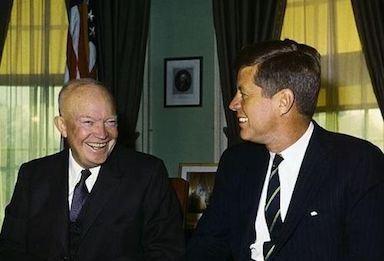 In policy matters, Eisenhower and Johnson were closer. When Johnson was the Senate minority leader in the late 1950s, Eisenhower worked with him to establish the country’s space program: NASA. Eisenhower supported President Johnson’s decision to expand America’s commitment of military assets to South Vietnam, but grew exasperated at Johnson’s gradual approach in Vietnam throughout the 60s. Later, President Nixon also sought his help, as did the governor of California, Ronald Reagan. 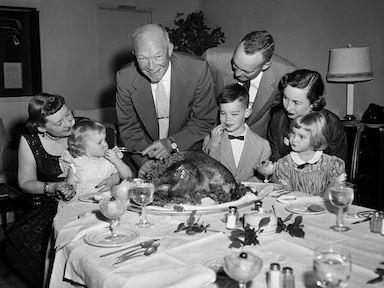 Ike and Mamie’s son John and his family (wife Barbara, and grandchildren David, Barbara Anne, Susan, and Mary Jean) lived in a home of their own about a mile away. They all spent lots of time together and the grandchildren brought Ike and Mamie their greatest joys.

Like many retired Americans, Ike enjoyed several hobbies. Golfing, fly fishing, painting, and playing bridge were among his favorites. He also enjoyed his herd of Angus show cattle.

In 1964, Ike traveled to Europe to film a documentary with CBS to commemorate the twentieth anniversary of D-Day. There, he returned to his old headquarters in Great Britain and to the beaches and military cemeteries of France. In the American cemetery overlooking Omaha Beach, Eisenhower reflected,

“These young boys . . . were cut off in their prime. They never knew the great experiences of going through life . . . but these people gave us a chance . . . . Every day I think about that day, I say once more: We must find some way to gain an eternal peace for this world.”

During these years, Eisenhower chronicled his presidency and life by writing The White House Years, which was made up of two volumes: Mandate for Change, 1953-1956; and Waging Peace, 1956-1961. He also wrote his memoir, At Ease: Stories I Tell to Friends. All of them offer amazing insight into Ike’s life and experiences as told by him. Additionally, he wrote articles for Reader's Digest The Saturday Evening Post.

After suffering a second heart attack in 1965, Eisenhower began to sense that his remaining time was short. He arranged to have Icky’s body moved from Denver to the Place of Meditation at the Eisenhower Center in Abilene, where he and Mamie would also be buried.

He suffered other heart attacks in April and August of 1968. Although he had to spend most of the last year of his life in a hospital, he was still a figure of leadership to the world. Speaking via television from the hospital, he addressed the 1968 convention of the Republican Party in Miami. On his seventy-eight birthday, the Army Band serenaded him outside his hospital window. A soldier to the end, he sent West Point's team a telegram right before the Army-Navy football game in 1968:

“For 364 days out of the year it is Army, Navy, Air Force, forever. Today it is Army, Army, Army. My heart, though somewhat damaged, will be riding with you and the team. Good luck!!”

On March 28, 1969, with Mamie, John, and his grandson David at his bedside, Dwight David Eisenhower died. Near the end, he had summed up most simply:

According to his own instructions, Eisenhower’s body was placed in a standard-issue soldier’s coffin. He was first taken to lie in state in the Capitol’s rotunda.

After the funeral in Washington, D.C., he went home via train to the heartland of America from where he had come, home to Abilene. There, near the small home of his childhood, Dwight D. Eisenhower was buried. Today, people from all over America and throughout the world visit the Eisenhower Center in Abilene. They come to see the Eisenhower Presidential Library, Museum, Boyhood Home, and Place of Meditation (burial site). They come to honor the memory of this great man.