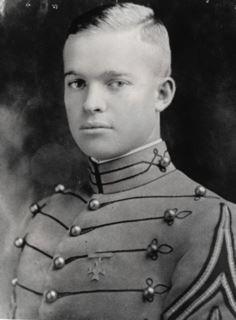 In the spring of 1909, Dwight D. Eisenhower graduated from Abilene High School. That summer he worked at a series of jobs to help put his older brother, Edgar, through college. In the autumn, Dwight took a job at the Belle Springs Creamery where he worked for nearly two years.

A friendship with Everett Edward “Swede” Hazlett was renewed when Swede returned to Abilene for the summer of 1910. He encouraged Dwight to apply for an appointment to the naval academy at Annapolis. On August 20, 1910, Dwight wrote a letter to a Kansas senator, Joseph W. Bristow, asking for an appointment, but received no reply. Then, when a notice for academy applications appeared in the local newspaper in early September, Dwight wrote again. This time the Senator wrote back with the information that Dwight needed to proceed.

In October, Dwight traveled to Topeka, Kansas, to take Senator Bristow’s service academies exam. He placed first for Annapolis and second for West Point with an overall score of 87%. But, at age 20, Dwight was too old to be admitted to Annapolis. Although he had placed second for West Point, the letters of recommendation written for him were so impressive that Bristow awarded him the appointment anyway. In January 1911, Dwight would take the West Point entrance exams, both academic and physical.

From October 1910 until January 1911, Dwight returned to Abilene High School to study for the physics, math, and chemistry portions of the test. He even played football for his old school. At night, in between duties at the creamery, he and Swede studied, snacking on ice cream and chicken roasted on a shovel in the furnace. Dwight passed his exams and was ordered to report to the United States Military Academy (USMA) at West Point, New York, by June 14, 1911.

As Dwight said his good-byes, his father David, said little, but his farewell to his mother, Ida, was filled with emotion. She embraced her third son, holding back her tears until after he had left. Along the way, Dwight stopped at Chicago to see his good friend, Ruby Norman, who was studying music at the Conservatory there. At Ann Arbor, Michigan, Dwight enjoyed several days with Edgar before the last leg of his journey to West Point, New York.

On June 14, 1911, Dwight Eisenhower, and 245 others, arrived at West Point on Initiation Day. For the newly arrived plebes, the experience was nothing short of bewilderment. Upperclassmen barked out orders to be obeyed, in double-time. Wide-eyed plebes raced in every direction to follow orders as best they could. At day’s end, the new arrivals took the oath of allegiance, which made them official cadets of the USMA. For 20-year-old Dwight Eisenhower, the ceremony had an unexpected and profound impact. He knew that from this day forward, “Duty, Honor, Country” would guide his path through life.

“ . . . when we raised our right hands and repeated the official oath, there was no confusion. A feeling came over me that the expression “The United States of America” would now and henceforth mean something different than it ever had before. From here on it would be the nation I would be serving, not myself. Suddenly the flag itself meant something.”  ~Dwight D. Eisenhower 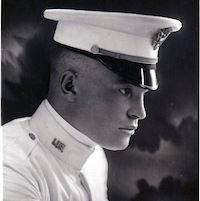 Plebes must first survive three weeks of “Beast Barracks” before joining upper classmen at Summer Camp. Here they receive their first lessons in obeying orders immediately, without question. Some could not handle the pressure of constant “crawling” and went home. At nearly 21 years of age, Dwight Eisenhower did not take it too seriously and adapted quickly. But because he could not march in step when he arrived, he was assigned to the “Awkward Squad” for more practice. At West Point, he recorded his name as “Dwight David” rather than the “David Dwight” in the family Bible. He began to use his nickname “Ike” on a permanent basis.

The “Goats,” those with lesser academic standing, called cadets with high grade point averages “Tenth-boners” or “Engineers.” Each month, a cadet’s parents received a report with a specific academic and discipline ranking.

For Ike, a free college education was important, but to play football was everything. As a plebe, he was about 5’9” and weighted only 152 pounds. With the goal of making varsity his second year, he stuffed himself at meals, worked long hours in the gym, and ran sprints ceaselessly. It worked. 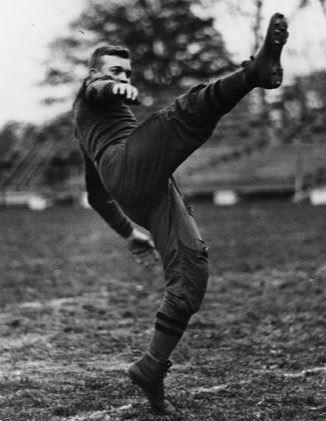 By the fall of 1912, Ike had made varsity and led his Army team to victory against Stevens Institute and Rutgers. He had known no greater glory. The New York Times proclaimed him “one of the most promising backs in Eastern Football.” In the next game, against Tufts, Ike’s knee was badly injured when he was tackled. Later the same week, during riding class, his right knee collapsed. Weeks later, when the cast was removed, it was clear he would never play football or baseball again.

Ike was despondent. Had his friends not intervened, he would have quit school and returned home. He smoked, accumulated demerits, and let his grades slide. As the football season began in 1913, he was once again depressed. When asked to help coach the junior varsity team, he discovered an alternative way to express his passion for football. Ike had a natural talent for bringing out the best in those under his leadership. When he was selected for a coveted position on the Honor Guard, he carried the American flag with pride. Ike Eisenhower had found his way again.

Ike enjoyed bending the rules at West Point, but, when caught, he was willing to accept the consequences. He received demerits for smoking in his room, saluting improperly, having a messy room, being tardy to class, and not doing his homework.

The rigor and discipline of life at West Point made furloughs all the better. Every cadet longed for the ten-week furlough at the end of the second year. When that time arrived in June 1913, Ike, and the rest of the class of 1915, spent some time in New York City, then he traveled home to Abilene for the rest of the summer. Occasionally, he would show off by parading around town in his tropical dress white uniform, starched and pressed to perfection. And, to made a little extra cash, he umpired local baseball games for $15.00. At Christmas time in 1913, Ike spent the eight day holiday in Buffalo, New York, with a classmate. In 1914, he went back to New York City for his Christmas furlough, staying at the Hotel Astor.

On June 11, 1915, Dwight D. Eisenhower graduated from West Point, ranking 64th out of 164 academically and 125th in discipline. His damaged knee threatened an early end to his military career, especially when he stubbornly insisted on an assignment to the infantry. In the end, however, his determination won out. The West Point graduates of 1915 would later be known as the “Class the Stars Fell On” because so many rose to the rank of general in World War II.

Following graduation, Ike returned home to Abilene for the summer. He and Gladys Harding went to the “picture show” and to band concerts in the park; they spent lazy summer afternoons with friends. Ike fell in love with her and spoke to her of marriage, but Gladys was not ready to give up her piano career with the Chautauqua just yet. When September 1915 arrived, Gladys resumed her musical tour and Ike reported to Fort Sam Houston. In less than a year, each would be married to another. 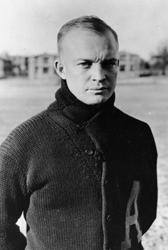 The West Point graduates of 1915 would later be known as the "Class the Stars Fell On" because so many rose to the rank of general in World War II.

This content is from The Eisenhower Life Series: Duty, Honor, Country, an educational series written by Kim Barbieri for the Eisenhower Foundation, copyright 2002. Funding was provided by the Dane G. Hansen Foundation and the State of Kansas.