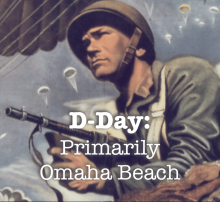 It is said that the defeat of Nazi Germany was sealed on Omaha Beach. One hundred and sixty-thousand troops landed within 24 hours on a 50-mile front. Students are introduced to the overall objective of D-Day and how its story is preserved through primary sources. They then apply that knowledge through examination of documents and artifacts from Omaha Beach.