“I occupy the enviable position of a man who wants nothing.”

By mid-1951 Ike was in Paris, hard at work laying the groundwork for a new military alliance destined to protect Western Europe from Soviet-advance. He was a grandfather, now 60 years old, and wanted nothing more than to complete his NATO mission, return to Columbia University, and — at some point — retire. Yet he was very worried for the future of his country in the uncertain atmosphere of the postwar era.

As early as 1943, Ike’s name had been casually linked with the highest office in the land. By 1948, public opinion polls indicated that he was America’s first choice for President of the United States. That same year, President Truman offered to run as his vice-president on an Eisenhower-Truman Democratic ticket. In the summer of 1949 and again in the fall of 1950, Governor Dewey of New York, approached Ike about a presidential bid. Ike made it clear: he was not interested.

The “Eisenhower for President” campaign took shape in the summer of 1951. Ike’s closest friends and prominent Republicans worked behind the scenes to organize a campaign and raise money. Even earlier, grassroots volunteers began to organize under the umbrella of “Citizens for Eisenhower.” “Ike Clubs” sprouted across the country. There were “Volunteers for Eisenhower,” “Mothers’ Clubs for Ike,” and even “Democrats for Eisenhower.” One Los Angeles group took out a political ad declaring themselves “Democrats Anonymous for Ike,” adding, “May our ancestors forgive us — we’re going Republican.” Campaign buttons, clothing, banners, toys, stationery — all appeared emblazoned with “I Like Ike.” 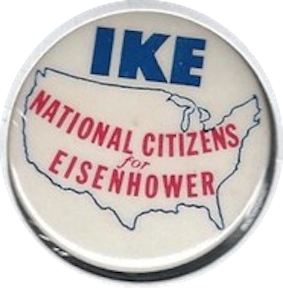 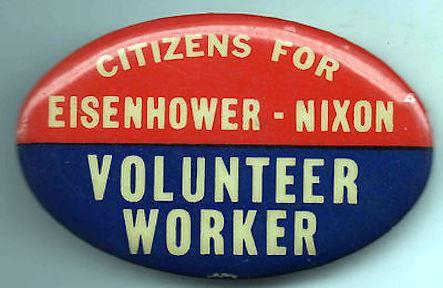 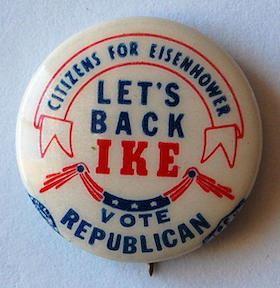 Pressure for Ike to agree to run intensified. On his 61st birthday, October 14, 1951, he finally wrote a confidential letter to his closest supporters. In it he stated reluctantly that, if there were a clear call to duty from the American people, he felt he had no choice but to serve. And, if drafted as the presidential candidate at the Republican convention, he would run.

As 1951 came to an end and 1952 began, the pressure on Ike continued to build. Just before Christmas 1951, a letter from President Truman arrived offering his support if Ike would run as a Democrat. For Ike, it was a stressful and uncertain time as he did his best to focus on his duties at NATO. He told his supporters that he would do nothing to hinder their efforts, but that was all he would do.

In early January 1952, the “Eisenhower for President” campaign made public a letter announcing that Eisenhower was a Republican and a presidential candidate. Ike was furious! He wrote a letter of reply stating that, although he had voted Republican, he was not interested in a presidential bid.

On February 8, an event took place at Madison Square Garden, New York, that convinced Ike, beyond any doubt, that the American people really wanted him. An “Eisenhower for President” rally attracted a crowd of 40,000 wildly enthusiastic supporters. Three days later, the Eisenhowers and friends watched the film of the rally at their home outside Paris. It was a sobering and emotional moment for Ike.

On March 11, 1951, while still in Paris, Ike won the New Hampshire primarily handily. One week later, he nearly won the Minnesota primary though his name was not even printed on the ballot. More than 128,692 voters had spelled “Eisenhower” correctly in a remarkable write-in campaign. Meanwhile, Senator Taft was steadily accumulating Republican delegates. A “Draft Eisenhower” strategy at the convention in July would be too little, too late. If Ike wanted the nomination, he would have to return home and fight for it.

On June 1, 1952, Eisenhower made good on his promise to return home to fight for the Republican nomination. He traveled first to Abilene to announce his candidacy on June 4. In the weeks that followed, he met with delegates all across the country. As the Chicago Republican national convention neared, the party was split much as it had been in the famous election of 1912. On the eve of the convention, the Associated Press estimated 530 delegates for Taft and 427 for Eisenhower. The Republican nominee would need 604 votes to win.

A number of states sent two sets of of delegates to the convention in July: one for Taft and one for Eisenhower. Taft’s people controlled the convention machinery, and they had no intention of seating the Eisenhower delegates. But Ike’s supporters challenged the convention’s leadership with a “Fair Play” amendment. Taft’s supporters fought hard, but Fair Play was passed; the nomination belonged to Ike on the first ballot. Richard Nixon was picked for the vice-presidential spot. He was only 39 years old but appeared to balance the Republican ticket perfectly. 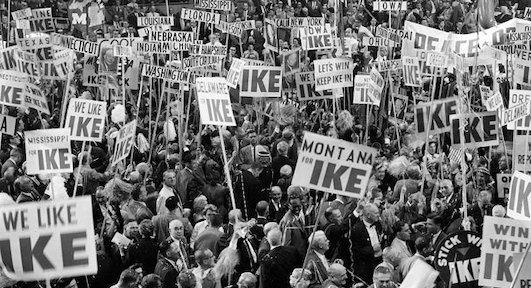 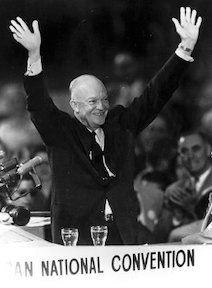 The general campaign began in early September. On a 19-car train, the Eisenhower Special, Ike, Mamie, and more than 35 campaign advisors, staff, and reporters traveled for two months on the last great “whistlestop” campaign in American history. By train and airplane, Ike logged more than 50,000 miles. To everyone’s delight, Mamie proved to be a natural campaigner. Soon campaign buttons appeared exclaiming, “I Like Ike, but I LOVE MAMIE!” 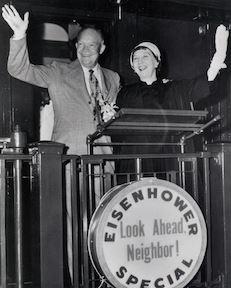 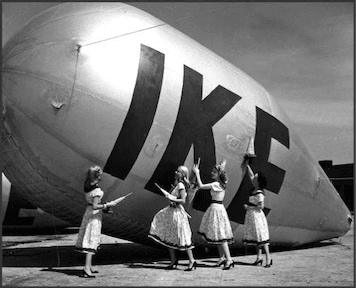 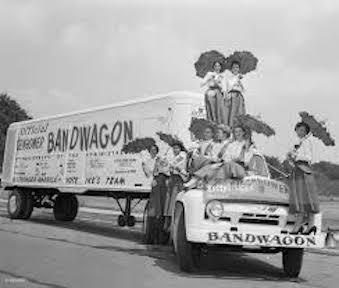 The 1952 presidential campaign was one of the nastiest in American history. President Truman took to the campaign trail in support of Stevenson. At one stop, a boy in the crowd shouted out, “We want Ike.” Truman fired back, “Well, why don’t you go get him, and you’ll get what’s coming to you.” He accused Eisenhower of being cozy with the Russians after the war and charged that Ike had been a poor Army Chief of Staff.

For his part, Ike denounced the Democrats for the Potsdam and Yalta agreements and blamed them for China’s fall to the communists. Further, he charged, the Truman administration was rife with corruption and had been soft on communism. If Truman had confronted the communist threat effectively, he argued, the Korean War might have been avoided.

No sooner had the fallout from the September Nixon calamity settled than a second crisis erupted for the Eisenhower campaign in early October. Throughout the campaign, Eisenhower wanted nothing more than to distance himself from Senator Joseph McCarthy of Wisconsin whom he personally found repugnant. However all along the campaign trail, reporters pressed the issue with probing questions, especially after McCarthy began to criticize Ik’s mentor and friend, George C. Marshall.

Against his better judgment, Ike was persuaded to eliminate praise for Marshall in a speech he was scheduled to give in McCarthy’s home state. The text of the original speech was leaked to the press, and the omission was painfully obvious. The public reaction was immediate, and Eisenhower staffers began to refer to it as “that terrible day.” Ike regretted this mistake for the rest of his life.

On October 24, Ike’s “I shall go to Korea” speech in Detroit set the Eisenhower campaign back on track. Election day was less than two weeks away.

November 4, 1952, proved triumphant for the Republican party; their candidate had won decisively. And, for the first time since post-Civil War Reconstruction, a number of southern states had voted Republican. More than anything else, election day was a great personal victory for Dwight D. Eisenhower. He had long ago earned the respect and trust of many Americans. They looked to him now to do his best to lead them safely through the uncertainty ahead. 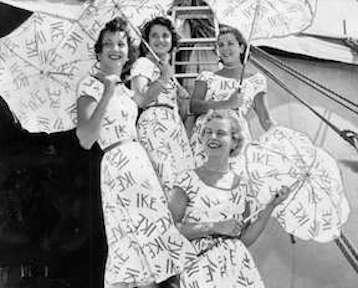 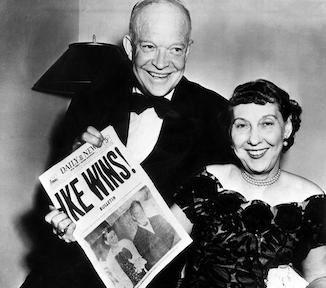 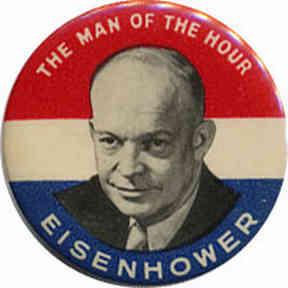 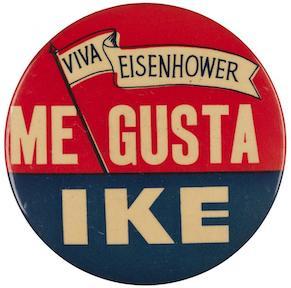