By 1951, Ike and Mamie Eisenhower were at a comfortable stage in their lives. Retirement to their new farm in Gettysburg was in the not-too-distant future. They had adapted to living a very public life and looked forward to being private citizens one day. In their home outside of Paris, they received a steady stream of visitors from the United States. The message was always the same: Ike must return home; the country desperately needed him. 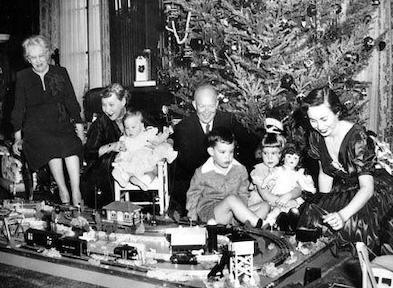 At Christmas time in 1951, close friends arrived in Paris to share the holidays. When the guests arrived for Christmas dinner wearing “I Like Ike” ties, hats, and campaign buttons. Ike turned red with embarrassment, but Mamie burst out laughing. The nicest gift of all that Christmas was a new granddaughter, Susan, born December 31.

Mamie loved their life in Paris. She and Ike had traveled widely and included among their friends heads of state and royalty. Their new home, Marnes-La-Coquette had been newly renovated and the grounds were beautiful. To pack up once more to begin a demanding presidential campaign was not an idea that either relished.

Through the spring of 1952, Mamie felt the pressures on her husband intensify. Sensing his mixed feeling, she wanted nothing more than to ask him to bow out of a possible presidential run. Yet, she knew that the decision must be his to make.

Throughout the Republican primary contest, the Eisenhowers endured stinging personal attacks. Because Ike was a national hero, Mamie more often was the target of nasty rumors. She continued to be criticized for her hairstyle, and during the general campaign so many letters were received that a special form letter was created to answer them. 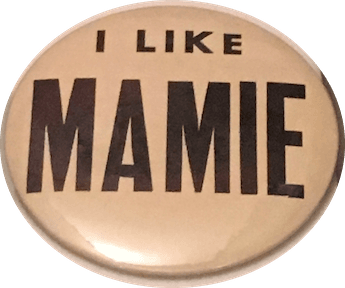 In the beginning, political advisors and staff tried to squeeze Mamie out of her husband’s inner campaign circle. But she stood her ground. In the end, Mamie proved to be a valuable asset to the campaign. She granted daily interviews and dictated thousands of letters. Ike appreciated her input as he crafted his speeches for a particular crowd. The American people adored her — so much so that two campaign songs were written in her honor, “Mamie” and “I Want Mamie.” One reporter following the campaign declared that she was worth at least 50 electoral votes.

Though the campaign schedule was exhausting for Ike, Mamie thoroughly enjoyed the fanfare, the noise, and the excitement. As she looked out over the faces of ordinary Americans, she was uplifted and felt a profound sense of responsibility. When the campaign train finally rolled to an end, Mamie realized with surprise, that she would miss it.

Arriving in Korea on July 27, John Eisenhower’s destination was the rear headquarters of the Eighth U.S. Army. Next, he was transported to headquarters north of Seoul, where he narrowly escaped friendly-fire. From there, John was sent directly to the front. Here he celebrated his 30th birthday. In early September, John was ordered to the 3rd Infantry Division headquarters for a new assignment. It was here he learned the results of the presidential election. Though happy that his father had won the presidency, he knew that all their lives would be forever changed.