The Eisenhowers would spend eight years in the White House, living there longer than anywhere they had lived before. For Mamie, especially, this was a happy time because Ike was never far away. White House staff observed that the Eisenhowers were an affectionate and sentimental couple. Mamie was devoted to her husband, and he, in turn, pampered her. A woman of her time, Mamie’s career was her husband, something of which she was very proud.

Mamie Eisenhower was well prepared to take on the duties of first lady. For more than 35 years she had been an army officer’s wife and for ten of those at the highest levels of military life. Long ago she had adapted to the many demands made on her because of her husband’s position. Mamie was accustomed to public life; she knew how to manage a large household and staff and she knew how to entertain graciously on a grand scale.

As first lady, Mamie received as many as 1,000 letters a month, and she insisted that each one deserved a reply. In her eight years as first lady, the White House Social Office received 500,000 letters. During her husband’s first term of office, she shook hands with an estimated 100,000 people. Each person that she greeted felt felt that he or she had been singled out for special attention from Mamie Eisenhower.

Mamie believed in courtesy and good manners. No matter how seemingly small the gesture, she always thanked everyone. Mamie had a reputation among Washington society for avoiding gossip and was considered a model of politeness. While first lady, she always remembered White House staff and their family members on their birthdays with a cake and gift. If someone was ill, she sent flowers. At Christmas, she was a legendary gift-giver. Even more importantly, she took the time to get to know her staff and their families personally and keep up on the news of their lives.

Mamie kept up a busy public appearance schedule. She was involved with up to five special causes per week. As first lady, she knew that she had the power to make things happen for worthy individuals and causes. Where she could make a difference she did not hesitate to do so.

The Eisenhowers often did not see each other until the evening. (Mamie was in the Oval Office only four times in eight years!) They ate supper together, usually on trays in front of the television, while they watched their favorite programs. Mamie’s mother lived for extended periods with them in the White House, and she joined them for the evening meal. Two or three nights a week, they watched a movie in the White House theater — usually a western. While Ike painted late into the night, Mamie was usually nearby reading or writing. Before falling asleep, Ike liked to read western novels because they relaxed him.

Ike spent long demanding hours at his desk in the Oval Office. So, as often as he could, he got away to play golf. (Ike’s love of golf helped to make it a sport of the middle class.) Now and then, his close friends, “the gang,” would receive a morning phone call from Ann Whitman that the president wanted to play golf and the gang would be in Washington that afternoon. Ike’s close friends became even more important now that he lived and worked at “the loneliest job in the world.”

The Eisenhowers vacationed with friends in Augusta, Georgia, in the winter, where Ike played golf, and in Colorado, in the summer, where he fished. When they were in Colorado, the Eisenhowers stayed at the Doud’s home at 750 Lafayette Street, which became a summer White House. Until their Gettysburg home was ready, they spent weekends together at Camp David, named for their oldest grandchild.

Mamie’s sister “Mike” (Mabel Frances) and Ike’s brother Milton lived in Washington. Mamie was close to Mike’s four children, and in fact, one of her nieces was named for her. Mike shopped for her sister and ran special errands. Milton was very close to his brother, the President, and they shared many of the same opinions. Often Milton traveled as the special emissary of the president, especially to Latin American. When Milton’s wife, Helen, died suddenly in 1954 at age of 49, it was a terrible blow to the family.

Mamie was anxious to finish their Gettysburg home so that she and Ike could spend weekends there. Most of the original farmhouse had to be demolished and the house rebuilt. Mamie had collected furnishings for nearly forty years, most of which were in storage. She was excited and impatient to decorate her first real home. When the house was finished in 1955, the Eisenhowers celebrated by hosting two parties for the White House domestic staff so that everyone could attend.

Ike’s heart attack in September 1955 had been traumatic for Mamie. But she had surprised those around her with her resiliency and strength. For her ailing husband, she was a source of comfort and calm. Ike received more than 11,000 get-well letters and cards, and Mamie replied personally to each one. When Ike recovered, he gave Mamie a gift of a gold medallion that he designed especially for her.

From the time that his father won the Republican nomination in July 1952 until a year later, John Eisenhower was on active duty in Korea. When the president-elect visited Korea after the 1952 election, his son John accompanied him on his tour of inspection. When John returned to Korea after his father’s Inauguration, Barbara and the children lived in the White House.

The Secret Service agents assigned to the Eisenhower grandchildren were dubbed the “diaper detail.” In order to have around-the-clock protection for each of the four children — the youngest, Mary Jean, was born in 1955 — 12 agents were necessary. Though not easy to do, John and Barbara insisted on carrying on as normal a family life as possible. The agents did their best to incorporate their jobs into the children’s everyday activities.

The third floor of the White House became a play area for the Eisenhower grandchildren. There were a canary and two parakeets. As well, there were tricycles, bicycles, and a miniature electric car that the children were allowed to ride in the hallways of the first floor after the day’s tour groups had departed. Her four grandchildren called Mamie “Mimi.” They were allowed to visit her in her bedroom and delighted in searching the nightstand drawers for special trinkets that Mamie placed there for them. On the other hand, Mimi expected only the best behavior. Inside the White House the grandchildren were not allowed to run, slide down the stairway banisters, or leave sticky fingerprints on the walls. 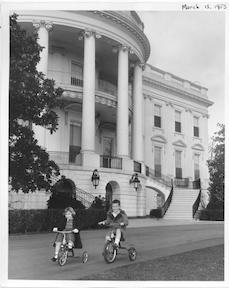 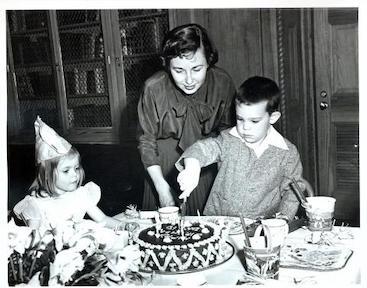 When Ike’s heart attack was followed by a very serious ileitis attack nine months after, Mamie had understandable concerns for her husband’s health. Despite her own misgivings and worry, she knew her husband too well to encourage him to retire. Too, she accepted that he wanted to complete what he had set out to accomplish. As Ike was reelected in November 1956, Mamie celebrated her 60th birthday knowing that there were yet four more years of duty ahead.