The weeks between Dwight D. Eisenhower’s election to the presidency and Inauguration Day were filled with activity. His first task was to find top people for cabinet positions and White House staff. On November 18, the president-elect met with President Truman in the Oval Office. The wounds of the recent campaign were still fresh, making the meeting uncomfortable for both men.

As November turned into December, Eisenhower fulfilled his campaign promise to go to Korea. For three days, he toured the frontlines, talked to soldiers and commanders, and met with South Korean President Syngman Rhee. Despite intense lobbying from Rhee, General Mark Clark, and John Foster Dulles for a bold new offensive in Korea., Eisenhower remained firm — he would strive to end the war as he had promised.

“Small attacks on small hills would not end this war.”

On the morning of January 20, 1953, President-elect Eisenhower was driven to the White House to pick up President Truman. The two men barely spoke on the drive to the Capitol. After taking the oath of office, the new president walked over to the new first lady and kissed her. Then he offered a prayer before beginning his lengthy speech. The Inaugural Parade which followed lasted six long hours. 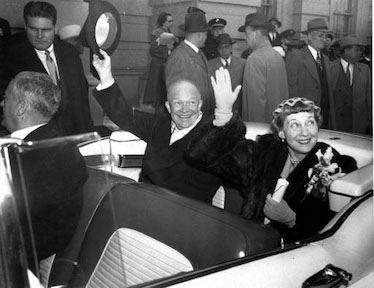 On January 21, 1953, Dwight Eisenhower entered the Oval Office, better prepared than many who had come before him, to begin his first day as President of the United States. He reflected on the gravity of the moment, later writing in his diary, that, in many ways,

"[The presidency represented] a continuation of all I’ve
been doing since July 1941 — even before that.”

Dwight D. Eisenhower came to the presidency not only well prepared to assume the weighty duties of the office, but also already accustomed to public life. As an international celebrity, he had long ago adapted to living a very public life. For years it had been impossible for him to enjoy simple pleasures like eating in restaurants or going to the movies. Eisenhower had learned to live in a world of aides and assistants; he had not been behind the wheel of a car in at least ten years. He had never dialed a telephone (Dials were then a modern feature.) or shopped in a supermarket. He did not even write his own checks. Possibly the only change that truly unsettled him when he became president was when lifelong friends addressed him as “Mr. President.”

Eisenhower typically began his day early, about 6:00 a.m. After reading the morning’s intelligence reports and major newspapers, he had breakfast at 7:15. By 8:00 a.m., he was seated at his desk in the Oval Office, a daunting stack of paperwork in front of him. Lunch was with his wife and a few members of Congress. Then at 3:30 in the afternoon, he would break away for about 30 minutes to practice golf shots on the South Lawn. Afterwards, he would return to his desk for another two hours. Before supper, the president sometimes met informally with leaders of Congress. Finally, at 7:00 p.m., he joined the first lady for the evening meal.

The executive branch of government had not been reorganized since the days of Herbert Hoover. So, in the first weeks of his presidency, Eisenhower set out to do just that. By delegating duties to competent staff and clearly outlining a strict chain of command, he would ensure that his energy and time were saved for only the most pressing problems of government.

He organized two staffs: a small personal staff and a larger official staff. Then he created the position of staff secretariat to coordinate the offices of the executive branch. Eisenhower preferred one-page summaries of documents to help him decide which needed more of his personal attention. Additionally, each day, he received a list of the most important actions taken by all three branches of government the day before. Letters from members of Congress were reduced to a list of one-line summaries. It was a simple thing, but by signing official papers with “DE” or “E” — rather than with his entire name — enormous amounts of time were saved.

Those who worked with President Eisenhower on a daily basis in the Oval Office were his secretary, Ann Whitman; Assistant to the President, Sherman Adams; Secretary of State, John Foster Dulles; and Press Secretary, Jim Hagerty. Mrs. Whitman — conscientious loyal and extremely hardworking — had a ringside seat to all that went on in the Oval Office. No one met with the President without the approval of Sherman Adams, who guarded the President’s time and energy zealously. Eisenhower and Foster Dulles, shared a deep mutual respect and worked extremely well together. However, there was never any doubt as to who was president. Jim Hagerty became Eisenhower’s trusted confidant and friend.

Eisenhower practiced a unique decision-making style. Unlike many in positions of authority, he expected staff members to express their opinions freely, and he encouraged them to do so. It was not surprising that, initially, they were less than enthusiastic about disagreeing with the President of the United States. Once a decision had been reached, however, Eisenhower expected all staff to support it absolutely.

Eisenhower established regular Friday morning cabinet meetings. He expected cabinet members to consider what was best for the nation as a whole, not their particular departments. As with White House staff, he encouraged cabinet members to state their opinions and to debate openly. The president often sat silently, head down, doodling on his paper, yet missing not a word. Occasionally, he would look up, point with his pencil, and ask someone for an opinion or join in the discussion. At the end of the meeting, he generally called for a vote, thanked everyone, and then announced his decision. On other decisions, he retired to his office to consider the issue further.

In the days of World War II, Eisenhower had learned the wisdom of nurturing good rapport with the press. He viewed press conferences as an effective method of keeping in touch with the American people. If a direct and candid answer to a reporter’s question might, in some way, compromise security or be inappropriate, Eisenhower was the master of the non-answer. He would launch into a convoluted, rambling reply that left reporters looking confused. A skilled writer and speaker. Eisenhower used the English language to accomplish specific objectives with a particular audience.

As the first “television president,” Eisenhower understood its power to communicate directly with the America people. Though an experienced public speaker, looking straight into the lens of a television camera was uncomfortable for him. After actor Robert Montgomery tutored Eisenhower, the president’s performance improved, especially once the camera was hidden behind a curtain. He even agreed to wear a light blue shirt, but he drew the line at tampering with his usual haircut.

To a much lesser extent than do presidents today, Eisenhower consulted public opinion polls as a measure of the public’s approval of his performance. Throughout his presidency, he consistently earned a 70-75 percent approval rating. Occasionally, it dropped a little below that. Following the 1954 election, he faced a Democratic Congress in addition to a split Republican party. The continued respect and high opinion that the American people had for him were essential to his leadership.

The Republican presidential contest in 1952 had divided the party, but Eisenhower was committed to unifying it once again. If he wished to see his programs become law, he would need Congress. Too, the Senate had the power to approve or reject his presidential appointments. Senate Majority Leader Royer Taft was gracious and generous with his help. But when Taft died of cancer in the summer of 1954, everything changed. The new Majority Leader, William Knowland of California, had little interest in mending fences. Members of the president’s own Republican party often proved more difficult than the Democrats.

National Security Council (NSC) meetings, like cabinet meetings, were held once a week every Thursday morning. Eisenhower rarely missed one. To help coordinate the work of the administration, the new post of “special assistant to the president for national security” was created. In addition to the president and vice-president, there were eight permanent NSC members. Eisenhower expected a spirited, factual airing of the issues among the members of the Council; he had little patience for lectures or speeches by its members. At some point in any discussion, the president would pose the question:

“What is best for America?”

After the formal meeting ended, a select few usually carried the debate into the Oval Office. Often the president participated with such intensity that his staff worried about his health.

In September 1955, Eisenhower was enjoying a well-earned vacation in Denver. In the early morning hours of September 24, he awakened with what he thought was a bad case of indigestion. Later that morning, his doctor admitted him to the hospital for tests. The president had suffered a serious heart attack. He was unable to resume a normal schedule until January 1956. Convinced that his temper had contributed to the heart attack, he resolved to learn to deal better with daily frustrations and to work more relaxation into his day. He was not pleased, but complied, when the doctor ordered a nap after lunch.

Since 1956 was an election year, and the question of the president’s health and whether or not he would run for a second term was a national preoccupation. When Eisenhower had agreed to run in 1952, he had planned to step down after one term in favor of a younger moderate Republican. To agree to serve another four years was not an easy decision. Eisenhower sought the counsel of family, friends, and advisors. In many respects, he was as torn as he had been four years earlier.

There were valid concerns among Republicans that if Eisenhower did not run in 1956 the Republicans would lose the White House. Eisenhower finally made up his mind; he felt he had no choice but to serve his country for four more years. In a televised message to the American people in February, he explained his decision and gave an update on the state of his health.

The 1956 Republican national convention was scheduled for August in San Francisco. Then, on June 6, a sever ileitis attack threatened the president’s life. Surgeons operated. Eisenhower was hospitalized for three weeks, and because it was so soon after the heart attack, his recovery was slow. Nonetheless, he felt well enough to attend his party’s convention where he was nominated by acclamation.

Eisenhower had warned that he would not campaign as actively as he had in 1952. His record would have to stand on its own. On Election Day, November 6, the choice of the American people was clear; they wanted their president for another four years. Eisenhower was reelected in a landslide, even more popular than he had been in 1952. Although he did not yet know it, in so many ways the next four years would prove even more difficult and exasperating than the first.