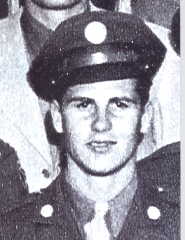 Errett Lujan enlisted in the 111th regiment of Cavalry, New Mexico Army National Guard on March 28, 1940. At the time, he lived with his two sisters and parents in Santa Fe, New Mexico. At 17 years of age, he was a high school junior so his enlistment required his parents' written approval. He looked toward the National Guard as a means to earn a living. Errett's regiment, renamed the 200th Coastal Artillery (Antiaircraft), was activated and federalized into the U.S. Army on January 6, 1941. His assignment for the next year was to become a disciplined and proficient soldier. His regiment, however, was deployed to Fort Stotsenburg, Philippine Island, in September 1941. The 200th CA (AA) was the largest American military unit in the Philippines when the Japanese launched its air attack on Fort Stotsenburg and other locations in the Philippines about four hours after the Pearl Harbor attack. Errett did not have another peaceful day until he was liberated from a Japanese prisoner of war camp in September 1945. His first assignment was to make their way to Manila where a few antiaircraft guns were stored, still in their shipping crates. They hauled them back to Ft. Stotsenburg where they would set up to protect Clark Field. However, once uncrated, they found the guns slathered with thick coats of grease. They cleaned them up, assembled the guns, and were actively engaged in combat within a remarkably short period of time. With the men sick, nearly out of ammunition, cut off from resupply and subsisting on one-fifth rations, it was decided that the defenders of Bataan should surrender to the Japanese. Weapons and equipment were disabled and what little was left of the ammunition was blown up. The men were ordered to surrender on April 9, 1942. Errett walked the infamous Death March route for seven days. He was first held at Camp O'Donnell, PI, then Cabanatuan, PI, and then Bilibid Prison, PI, before being transported to Japan aboard the Nagato Maru, arriving at Tokyo Prison Camp #3, also known as Mitsushima. Errett toiled with others in constructing a hydroelectric dam. His specific job was to mix cement for the structure with his bare hands. After a year and a half at Mitsumisha, Errett was moved for the last time as a prisoner to Kanose near Niigata, Japan, where he and his fellow prisoners worked at the Showa Denko carbide plant. His joyful day of liberation was September 1, 1945. Errett was among the mere half of his 1,800+ regiment that returned from the war. Along the way, he witnessed many atrocities, inhumane treatment (some of which befell him), and pitifully few kindnesses. There was an old Japanese man and a boy, his grandson Errett thought, who lived near the Mitsushima camp that risked their lives to deliver a handful of live-saving provisions over the fence to his outstretched, grateful hands every now and then.