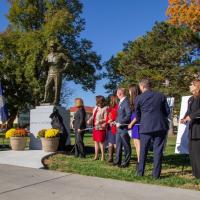 Kansas Governor Jeff Colyer and members of the Eisenhower family participated in the official unveiling of a new statue honoring Kansas' favorite son, Dwight D. Eisenhower, on the statehouse grounds on October 22, 2018.

“Ike is the true definition of a leader. I take great pride in the fact that one of the greatest leaders of the past century was from Abilene, Kansas, right here in the true heart of America,” said Gov. Colyer, M.D. “Ike taught us that in order to effectively lead, you need to listen and serve, a model for all Kansans to follow.”

Mary Eisenhower said that of all of the honors received by her grandfather, “this would be one of his most treasured.”

“He loved Kansas. He loved Kansas so much he returned every time something major in his life happened,” she said. “For example, when he ran for president, he went back to his town of Abilene, which I proudly call home myself now, to announce he was running for president because he wanted to be with his friends and his family and the people that he loved at such a momentous time for him.”

“He was a solutions man,” she said of Eisenhower. “His values, which would be a good learning now for the nation, started right here in the great state of Kansas,” she said.

Jim Brothers Sculpture Studio, Lawrence, Kansas, designed the statue similar to the one in the U.S. Capitol in Washington, D.C., showing General Eisenhower visiting with paratroopers before the D-Day invasion. Peterson Monuments & Design of Abilene, Kansas, provided the granite pedestal and base for the seven-foot bronze statue. The statue was made possible by private donations.

Eisenhower grew up in Abilene, Kansas, where his boyhood home, Presidential Library and Museum are located. He served as Supreme Allied Commander, Allied Expeditionary Forces during World War II and was elected 34th President of the United States in 1952 and 1956.

“Kansas is the true heart of America,” Colyer said, “and if you think about this past century, there’s probably one man that stands above all other Americans in forming this great nation and changing it and setting the stage for the modern world.”

In Kansas, and across the nation, we still like Ike.