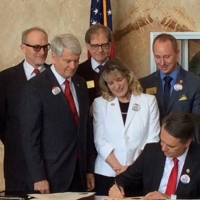 “The idea of servant leadership is encapsulated in Ike, and I take great pride in the fact that one of the greatest Americans of the past century was a quiet Kansan,” Colyer stated. “He taught us that you have to listen before you serve and you have to serve selflessly before you can lead effectively, and that is a standard I have tried to live up to my entire life.”

The statue will be funded through private donations. Plans are to unveil the 7-foot bronze statue in the days leading up to Eisenhower’s October 14 birthday.