“I am inclined by nature to be optimistic about the capacity of a person to rise higher than he or she thought possible once interest and ambition are aroused.”

In the decade following World War I, neither the country nor Dwight D. Eisenhower would ever return to life as it had been. These were the “Watershed Years,” a period of exhilaration and accomplishment and, in Eisenhower’s own words, it was the time of the “greatest disappointment and tragedy of my life.”

By March of 1919, the United States was rapidly gearing down from the war. Ike had returned to Camp Meade where he continued to work on demobilization. There was no housing available for families so Mamie and Ikky continued to live with Mamie’s parents, the Douds. Ike was bored and restless. To help pass the time, he organized a night school for soldiers and, on weekends, spent his time at target practice.

There is a cyclical career path for officers of the peacetime Army: a staff assignment, followed by schooling, and then service with troops. Ike’s assignments after the war roughly followed this pattern with a special emphasis on schooling. While stationed at Camp Meade, he traversed the country with the Transcontinental Motor Convoy as an official tank corps observer and graduated from the Infantry’s Tank School. Then his orders sent him to Panama, where he matured under the tutelage of Brigadier General Fox Conner. Interim assignments at Camp Meade and Ft. Logan, Colorado, were followed by an appointment to the prestigious Command and General Staff School at Ft. Leavenworth, Kansas. Finally, he was stationed briefly at Ft. Benning again, this time happily commanding troops, when Fox Conner would, once more, open doors of opportunity for his protégé.

These were years of intellectual challenge and great adventure for Ike. From July 6 to September 6, 1919, he traveled with the Transcontinental Motor Convoy from Washington, D.C. to San Francisco. Following a route that often was no more than wagon ruts, the convoy wound its way across the country at six miles an hour. In between daily repairs and near disasters, Ike and his comrades managed to find time for practical jokes and to take in the great geographical panorama of the American West. 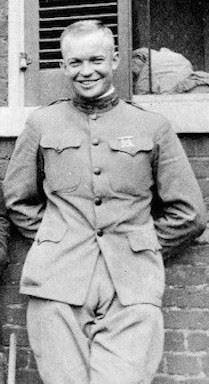 In the autumn of 1919, Dwight D. Eisenhower and George Patton met for the first time at Camp Meade. Despite marked differences in background and personality, “Georgie” and Ike became fast friends. Both were West Point graduates, avid football fans, and enthusiastic about the tank as the weapon of the future. When not conducting experiments with tanks, they rode horseback, practiced pistol shooting, and played poker. It was Patton who arranged for General Fox Conner and Ike to meet in the autumn of 1920. When Conner received orders for the Panama Canal Zone in late 1921, it was Ike whom he requested for his executive officer.

The past year had been grief filled for Ike because of the sudden death of his son, Ikky. Further, Ike was in the process of defending himself against a serious charge that threatened to end his military career. Orders sending him to Panama, under the command of General Fox conner, were both a blessing and a new beginning.

Conner took Ike under his wing and rekindled his enthusiasm for life and learning. With Conner as his teacher, Ike began a serious study of history, military science, political science, and philosophy. In the dry season, for up to eight ours a day, the two men rode horseback through the rainforests of Panama, engaged in thoughtful discussions on classic works like The Federalist and On War.

It was Conner who explained the inevitability of the coming world was to Ike. To win this war, he explained, the United Sttes would have to fight as part of a multinational alliance. Further, Ike should do everything possible to place himself under the command of Colonel George C. Marshall, a man Conner regarded as a genius.

When Ike’s Distinguished Service Medal was awarded in October 1922, it was Fox Conner who pinned it to his chest. In a 1924 efficiency report Conner had the highest praise for Ike, recommending that he be selected for the Command and General Staff School at Ft. Leavenworth, Kansas. At the time, Ike did not realize it, but Fox Conner had prepared him well for the intellectual rigor and pressure of the school. As well, Conner was working, behind-the-scenes, to ensure that Ike would be in a position to take advantage of an opening at the Leavenworth school.

"Life with General Conner was a sort of graduate school in military affairs."

As a student at Command and General Staff School, Eisenhower was in competition with 244 of the best officers in the U.S. Army. The course work was designed to identify the brightest students who could handle intense pressure. Ike's study partner was a good friend from the early days at Ft. Sam — Leonard “Gee” Gerow. In October 1925, Eisenhower was fourteenth in his class, but by graduation day, in June 1926, he graduated first with “Gee” only a fraction of a percentage behind him.

Ike’s personal life was a rollercoaster of highs and lows during this period. In September 1919, Mamie moved into an apartment close to Camp Meade. Ikky had to remain behind with his grandparents because of the poor condition of the apartment. Mamie rarely saw her husband and the loneliness of the cramped and dingy rooms was more than she could bear. Within a month, Mamie was back in Denver.

By August 1920, both Mamie and Ikky were united with Ike. Family life was nearly perfect. Ike was an affectionate and doting father, and Ikky was an irresistible child. The men of the Tank Corps adopted Ikky as their mascot and outfitted him with his own miniature uniform and overcoat. Each afternoon, he went with his father to football practice, where he stood at attention and saluted as the colors passed by.

When Ikky fell sick just before Christmas 1920, he was diagnosed with scarlet fever. He was placed in the hospital, in quarantine. Mamie was sick and bedridden. Ike kept vigil over his sick child by pulling himself up on the window ledge outside Ikky’s room. There was nothing anyone could do but wait and hope. On January 2, 1921, at the age of three, Doud Dwight Eisenhower died. Grief-stricken, his parents took his body back to Denver to be buried alongside Mamie’s two sisters who had died in adolescence.

One year later as they arrived in Panama, both Mamie and Ike were deeply depressed over the loss of Ikky, and their marriage was adrift. The two-story, metal-roofed house they moved into was a mildewed shack on stilts, and nothing kept out the rats, bats, and cockroaches. Virginia Conner showed Mamie how to make the house livable, she lent a sympathetic ear, and she encouraged Mamie to take better care of her health and appearance.

Early in the summer of 1922, Mamie returned to Denver to await the birth of their second child. On August 3, Ike was there when John Sheldon Doud Eisenhower was born. His birth was a joyous event that allowed his parents to focus on the future instead of their pain. When “Johnny” was two months old, Mamie returned to Panama with her son and a nurse hired by the Douds. Every precaution would be taken to ensure the safety and health of their newborn.

In the summer of 1926, all six Eisenhower brothers assembled for a three-day family reunion in Abilene. Ida was thrilled to have her boys home again. Ike had just graduated first in his class from CGSS; Arthur was a banker in Kansas City; Edgar, an attorney in Washington state; Roy, a pharmacist in Junction City, Kansas; Earl, an electrical engineer in Pennsylvania; and Milton was the Assistant Secretary of Agriculture in Washington, D.C. The Eisenhower boys from Abilene’s Southside had made something of themselves in a big way. And, just in case Abilene’s citizens had not yet noticed, all six marched uptown on Buckeye Avenue, arm in arm, in a display that the locals later christened “The Big Parade of 1926.”

This content is from The Eisenhower Life Series:  Duty, Honor, Country, an educational series written by Kim Barbieri for the Eisenhower Foundation, copyright 2002. Funding was provided by the Dane G. Hansen Foundation and the State of Kansas.