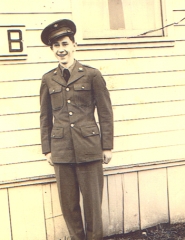 Lenny, as he was known to all of his friends, was born on 28 February, 1922 in Melrose Park, IL. He was inducted in the Army of the United States on 25 September and activated 9 October 1942. He took his basic training at Camp Grant, Ilinois. He was sent to Tank and Mechanic school where he was assigned as a driver of a light tank. Participating in several training maneuvers and Camps in the United States as a tank driver with Company D, 34th Tank Battalion, 5th Armored Division. The 5th landed on Utah Beach on 24 July, 1944. They participated in the attack with the 3rd Army in early August in the breakout at Avrancehs, France. By August 8th they were in LaMans, fought in the battle of 'Falaise Gap,' then headed east and on August 20, 22, 23, and the 24th, the 5th Armored Division was all over the Seine River and headed to Paris where they paraded on through by the end of August heading nort east with the 1st Army. By September they were at Sedan where the 5th was the first unit across the Meuse River. Attacking east the 5th crossed the Our River and was also the first American Troops in Germany to reach the Siegfried Line. Heading north they were in St Vith in mid November and when the Battle of the Bulge started they fought at Monschu, Rotgen, Maubach, & Widen. On Lenny's 23rd birthday, February 28th, the 5th was in Hornbroek and heading north for 'The Ruhr' and crossed the Rhine at Wesel. The end of March they were at Munster and rapidly advancing, on the 12th of April they reached the Elbe River, and the 5th became the nearest American Division to Hitler's Berlin. On 23 April, Lenny's Company D, after two days of fighting at Tangermunde, raced 55 miles north to the Klotze Forest and fought the Von Clause Division. A newspaper article quoted Lenny. 'We lined up, and they started coming out of the woods at us and we were knocking them off, let me tell you. But they had a lot of stuff in there---armor, infantry, bazookas, oh, that 88 was something. It could go through a tank like putting your finger through a paper. They had horses, too, and a lot of those poor horses got killed. I guess they finally just said 'This is crazy' and gave up.' Klotze Forest was the last fight for Lenny and the 5th. Lenny told me that he had been blown out of two tanks in his fighting across Europe but no Purple Hearts. Two weeks later the war ended. His 4 battle stars are for Northern France-Ardennes-Rhineland and Central Europe. He was awarded European African Middle Eastern Theater Ribbon with four Bronze Stars, two Overseas Service Bar, one Service Strip Good Conduct, American Theater, WWII Victory Medal. On 26 September, 1945 he boarded a transport for the USA and on 15 December, 1945, he was separated from the Army at Fort Sheridan, Illinois.