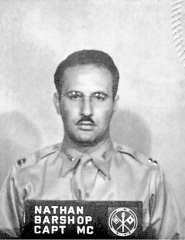 He was the recipient of a Presidential Citation with two Oak Leaf Clusters and a Bronze Star. Specially cited in John Gibbs report of 7/31/1946 American POW Information Bureau re: Fukuoka Camp #10 (formerly #7): 'Captain Barshop, Army Medical Corp, was Camp Surgeon, but worked under the direction of a Japanese officer who shifted his responsibilities upon the shoulders of the American officer who, by temperament and medical skill, is credited with saving many lives and boosting morale under disheartening conditions. Captain Barshop also protected the prisoners against work decrees issued by the Japanese Camp physician when they were too weak to stand for even a brief period.'
An M.D. at 20, Major Barshop was stationed in the Philippines. After Pearl Harbor, during the battle for Bataan, at Camp O'Donnell, her performed surgery and cared for the sick and wounded with other medical personnel for six days with only infrequent 15 minute rest periods. He was taken prisoner when Bataan fell. At one internment camp, her performed surgery on and cured the chronically-infected foot of the Japanese commandant. Offered personal favors and special rations, he steadfastly refused, holding out for soy protein and medication for his patients. When the commandant finally relented and sent rations, many prisoners' lives were saved. A fellow medical officer, Harry Levitt, recalled 'Barsh' was the only prisoner who refused to barter rare cigarette rations for other prisoner's food because he know that with their severer malnutrition it would be hastening their deaths. He simply gave his away.
When allowed to send one letter home after arriving in Japan on the 'hell ships' from the Phillippines, he wrote his family, 'I can only tell you it is like Forest Lawn over here,' Japanese censors had no idea Forest Lawn was a cemetery, so his letter made it home. As eventually did Major Barshop, who went on to have a wonderful surgical practice for another 50 years. He was one of three doctors who founded Mt. Sinai of Cedars-Sinai Medical Center in Los Angeles. In 1949, he married Coe Thelma Fisher, a graduate of the U.S. Army Nursing Corps and had three children.