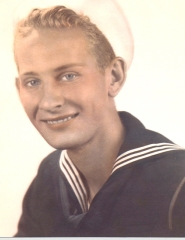 My service to our country was in New Guinea, and the Philippines. This was the location to which General MacArthur returned on October 20, 1944, after abdicating the Philippines in March, 1942. As I stood watching, I saw General MacArthur wade ashore to reclaim the Philippines. Tacloban was briefly the seat of the Philippine Commonwealth Government, from October 20, 1944 to February 27, 1945 and was a port city, with ship unloading facilities, so it was constantly a target for Japanese planes, which bombed us regularly. When they ran out of bombs, the Kamikaze pilots would fly their planes directly into the target. Our Naval Construction Battalion, 'The Seabees' was involved in the initial invasion of Leyte Island, at Tacloban. We lived in foxholes, which we dug ourselves, for what seemed a long time. It was, in fact, only a few weeks until our camp was built then we lived in them. Our job as 'Seabees' was to rebuild the airstrip, which was pockmarked from bombs, and to enlarge the dock area. Our secondary effort was to build miles of roads (where there were none) to carry supplies to outlying command posts. A big, tin manila hemp warehouse was adjacent to the dock area, where a Japanese sniper had taken cover inside behind some rolls of hemp. His goal was to kill as many dock workers as possible. He failed. I now have his rifle. I am proud to have served my Country, and my goal is to be the oldest surviving World War II Veteran.