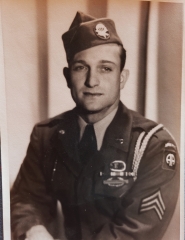 Battles he was in:
Cassino, Italy

Battle of the Bulge in Belgium

Cologne, Germany to the Elb river where they met the Russians

Berlin as occupation troops until the end of the war.

The following two paragraphs are from Tommy Zouzas's memoirs in 'Tales from a Devil in Baggy Pants'.

"After my jump in Holland, I broke my lower leg. I was sent to England and was a casualty, lying on a stretcher, when a friend gave me two new 6 x 4 foot German flag with a large swastika in the center. As a doctor was looking me over, he saw the flags, and in an excited voice he said, "What would you take for one of those flags?" I instantly answered with "A bottle of Scotch!" Here we were, a hundred miles behind the lines and within a few minutes he retuned with the scotch!"

"One time in Germany, I had some prisoners to move to another location. It so happened that I marched them past a small town that most of them had lived in before. As we went by the town, word got out to their families and friends that we were coming. So the whole village surrounded us -- hugging, crying and making a hell of a scene. I didn't know what to do. My first thought was to start shooting into them or above to scare them off. I was confused so I did nothing which turned out to be the best solution. As far as I could determine after the melee was over I hadn't lost any prisoners that could have melted into the crowd."

"In all of us, there is some of us" (I woke up saying the above. I don't know why or how this occurred,)

Dad was in school at K -State where he was on the football team when the war broke out. He quit school and joined the army. He liked adventure so he decided to become a paratrooper. He loved his choice he made and had lots of adventures! He was very lucky and was able to come home at the end of the war. He went back to his Hometown of Ellsworth where he met Christine Foster. They were married in 1947 and were married for 66 years. They died within 7 weeks of each other. Dad worked in several businesses over the years in Ellsworth. Dad was always a great provider and a wonderful dad to his 4 children. We were lucky to have him as our dad! Our dad was always very proud of his service and the contribution that he and his fellow soldiers made for freedom! He was able to go to Normany, France for the 50th reunion of the invasion of Normandy where he jumped again! A few years ago a young paratrooper took our dad's ashes to Normandy and spread them on the beach!